Sometimes you don’t need the slimmest or skinniest laptop around. Sometimes a beefy gaming graphics card is surplus to requirements. Sometimes all you need is an Acer Aspire 5. Acer’s long-running “Goldilocks” laptop is an ideal all-rounder machine, and is now available at a £100 discount.

The 15.6in machine has a 12th-gen Intel Core i5 CPU and 16GB of RAM, so will be perfect for desktop duties, and the 512GB SSD is big enough to hold loads of photos, music, videos and files. The GeForce MX550 graphics card is a slight step up from Intel’s integrated GPU, so it should even manage a bit of light gaming. It was a good deal at full price, but during Black Friday you can get it for £699 from Currys.

Chromebooks sit at the more affordable end of the laptop spectrum, but the Acer Spin 513 is more affordable than most thanks to a Black Friday price cut. This 2-in-1 can double as a tablet, and should last up to 14 hours away from the mains thanks to an efficient Qualcomm chipset. There’s £100 off the retail price right now, meaning you can take one home for £299.

If you like your tech to be as environmentally friendly as possible, the Aspire Vero is the laptop to look for. It’s made from post-consumer recycled plastic, was designed with upgrading in mind so you can easily access the 8GB of RAM or 512GB SSD should you want to swap them out later, and even the packaging doubles as a laptop stand once you get it out of the box. Acer will also plant 100 tress for very Vero sold, and help you donate any old laptops to charity. Our model pick usually costs £650, but you can get one from Amazon right now for £499.

Acer’s Predator gaming division is also reduced for Black Friday. The pick of the bunch has to be the Nitro AN515-57: it might be a mouthful of a model name but isn’t short on performance, thanks to An Intel Core i9-11900H processor, 16GB of RAM and a dedicated Nvidia GeForce RTX 3060 GPU. That’s more than enough gaming grunt to run titles at the 15.6in screen’s native 1080p resolution. It’s a 144Hz panel, too, so motion should look super smooth. It usually costs £1299, but can be had this week for £999.

Maybe you’ve got a perfectly decent gaming laptop, but want a bigger screen to hook it up to? The Predator X38S should fit the bill. This gargantuan 37.5in curved ultrawide has a sharp 3840×1600 resolution and rapid 175Hz refresh rate, dual inputs (HDMI and DisplayPort) and a handy USB hub built-in to save cables snaking across your desk. Before Black Friday it would have set you back £1399, but you can get one from Currys for £999.

Listen up, Audio Technica’s ATH-SPORT7TW wireless earbuds are 69% off this Black Friday

Enjoy the sweet sound of savings 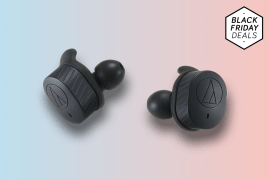 Mice, keyboards, headsets and more are all reduced 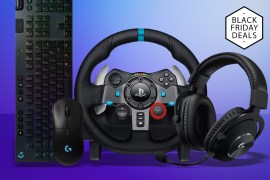