Every year, Mobile World Congress is where we get our first taste of the brilliant new phones that’ll fill our pockets in the months to come – and MWC 2018 didn’t disappoint.

While LG and Huawei skipped their usual opportunity to unveil their latest core flagship models, several other makers – such as Samsung, Sony, and Nokia – showed off an array of handsets with innovative new features… or at least a bit more power and polish.

We’ve been covering all of the action from the show floor this week, and now it’s time to make some decisions. Which of this week’s new phones were the true showstoppers in the bunch? Here’s how we rank the 12 biggest phone debuts from MWC 2018.

We know, this isn’t likely to be a phone you’ll actually buy. But as our opinion feature pointed out, we couldn’t help but feel a twinge of nostalgic excitement upon seeing Nokia’s bananaphone redux.

The Nokia 8110, which you might recall from a starring role in The Matrix, is much like it was in the late ’90s: sleek, simple, and obviously best in yellow.

It’s not exactly the same, though: the shell that covers the keys is no longer spring-loaded, but on the upside, it now has 4G connectivity in the mix. So while you’re not going to swap your high-end flagship for this dirt-cheap (€79) flashback, it could make a pretty ideal phone for festivals, outdoors getaways and Matrix-themed fancy dress parties.

So you’ve been luxuriating in the super-smooth ride of your Land Rover Discovery. But there’s something missing, right? Yes, a similarly rugged, Land Rover-badged smartphone to bark at people from, of course.

The Land Rover Explore is a phone built to take a beating: it’s waterproof, drop-resistant, and can take on extreme temperatures and more without losing a step.

It looks the part, as well, but it shouldn’t skimp on performance: you’ll find a deca-core MediaTek processor inside, 4GB RAM, and a 5in 1080p display. And the 4,000mAh battery pack should last you for a long trek, plus you can snap on additional battery modules as needed. It’s due out on 26 April 2018 for £599.

Also Read › The official Land Rover smartphone is looks as tough as, well, a Land Rover

ZTE makes cheap phones that almost look like flagships, and that’s definitely the case again with the ZTE Blade V9. This budget beauty follows the trend of packing a taller 18:9 display on the front (5.7in at 1080p), plus it has a dual-camera setup (16MP/5MP) on the back.

Android 8.1 Oreo and a 3,100mAh battery are also highlights, and while the Snapdragon 450 processor won’t hang with handset heavyweights, it should be enough power to run through most apps, games, and media without much struggle. The Blade V9 will arrive at €269 sometime this year.

Last year’s Nokia 6 did a fine job of ushering the Nokia name back into smartphones, and this year’s edition looks even better. The new Nokia 6 is still a lower mid-range affair, now with diamond-cut aluminium and a two-tone anodised finish that looks ever so appealing up close.

The 5.5in LCD is a standard 16:9 1080p panel, so nothing terribly exciting there, but the Snapdragon 630 chip should be a step up from last year’s phone, not to mention some of the Nokia 6’s upcoming competition. It’s not the most exciting Nokia in the bunch at MWC, but the €279 price point might make it the best value in the pack.

Asus proved to be the Noel Gallagher or MWC 2018, with the notch-packing Zenphone 5 clearly ‘inspired’ by a certain flagship Apple phone.

But to call this Android phone a straight-up clone would be missing some of its neat ideas, such as the A.I-assisted scene recognition for refining your snaps and some powerful stereo speakers.

The idea of getting an all-glass 6.2in phone that looks this good for a mid-range price tag is certainly enticing too. We’ll find out exactly how much that’ll be (and when the Zenphone 5 is out) very soon.

Nokia’s MWC lineup has something for seemingly everyone, and the Nokia 8 Sirocco is the real-deal flagship in the bunch. Last year’s Nokia 8 fell a bit flat, but the Sirocco seems to have the right ideas – for the most part.

A stainless steel frame, thin build, and curved 5.5in display give it premium allure, and it’s a Quad HD OLED to boot – so it should look fantastic. However, it’s 16:9 instead of 18:9, which means there’s more bezel in play than you might hope for.

Last year’s Snapdragon 835 chip also means it’s a step behind some competition, although it felt plenty fast in our hands-on testing. We’ll see whether it’s really a top-shelf contender when it releases in April at €749.

After years of sagging smartphone fortunes, does the Xperia XZ2 signal Sony’s comeback? We’re not totally sold yet, although we’re glad to see the tech giant try a new look follow years of that familiar, boxy shape.

The Xperia XZ2 should be a powerhouse performer, thanks to the new Snapdragon 845 chip and 4GB RAM inside, as well as Android Oreo. The 5.7in 18:9 screen is only 1080p, but the ability to upconvert standard-range HD video into HDR territory is compelling… as is the 960fps slow-mo video recording on the 19MP back camera.

We’ll find out in a few short weeks if that’s enough to hang with Samsung and Google atop the Android flagship field.

Seeking a phone that doesn’t look or feel as cheap as it actually is? Maybe Asus’ ZenFone Max Plus M1 will do the trick. It doesn’t have the Apple-like notch of the ZenFone 5, but the Max still packs in a few surprises.

It holds a 5.7in 18:9 1080p display, along with a dual-camera setup on the back – and the huge 4,130mAh battery should outlast any other smartphone on this list. The MediaTek MT6750T chip probably won’t win any speed contests, but the 3GB RAM could help keep things swift enough.

The Xperia XZ2 Compact might be the smaller of Sony’s new phones, but it seems to pack a real punch – and it’s the more compelling handset of the two, surprisingly enough.

The XZ2 Compact keeps the power of the Snapdragon 845 chip (with 4GB RAM) while trimming down the 18:9 screen to just 5in, making this the potential small phone of choice for 2018. The 19MP back camera promises to be Sony’s best yet, with 4K HDR video shooting and improved low-light shots.

The Compact isn’t as glossy as its big brother, but it should pack in a ton of power into a tiny frame.

Yes, the Samsung Galaxy S9 does seem an awful lot like the Galaxy S8 – perhaps too much like it, in fact. But when we’re talking about the successor to last year’s absolute best smartphone, it’s hard to get too upset about sticking with a familiar framework.

The Galaxy S9 keeps the same overall design and screen as before, but packs in more power via the upgraded Exynos processor. And its biggest trick comes with the camera, which now features a wider f/1.5 aperture to let in more light, but can also automatically swap to f/2.4 for added detail when you have plenty of light.

Will this be 2018’s must-have flagship? We wouldn’t be surprised.

Nokia’s flagship is certainly compelling, and its lower-level options are worth a look – but the most intriguing phone in the bunch falls right in the middle of the pack. The Nokia 7 Plus is billed as an "affordable flagship," packing in style and power without breaking the bank.

It has an appealing look, with an animunium frame, dual anodised edges with contrasting colours, and a ceramic paint finish – plus that 6in 1080p OLED panel (extra-tall at 18:9) looks great, and the Snapdragon 660 should provide a fair bit of processing grunt in the upper mid-range territory.

At €399, it’s enough of a savings from the OnePlus 5T to consider the step-down, although the Nokia 7 Plus hardly looks like a concession at all.

Like the standard Galaxy S9, Samsung’s larger Galaxy S9+ is mostly the same as last year’s phone, albeit with an extra punch of power within. But at least the Galaxy S9+ makes more of an effort to differentiate itself from its little brother.

Here, you’ll find a dual-camera setup in the back, with the main sensor using the same kind of adjustable aperture trick seen on the base model. And you’ll also get another 2GB RAM in the mix, for a total tally of 6GB.

Overall, it’s still a matter of revision over revolution, but this is another stunning Samsung phone with a big, beautiful screen and plenty of perks. And it’s hard to feel too let down by that. 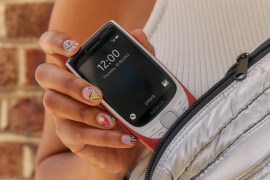