It’s been everywhere already thanks to Samsung being leakier than a bucket with no bottom, but the Galaxy S22 is now official.

As expected, there are three S22 models, the standard S22, a larger version of it in the form of the S22 Plus and the range-topping Galaxy S22 Ultra, which is – unsurprisingly – the phone of real interest.

The Ultra is more like a Galaxy Note in scope and now has a dedicated slot for the S Pen stylus. All three phones have Qualcomm’s Snapdragon 8 Gen 1 chips in the US and Exynos 2200 chips developed by Samsung in collaboration with AMD elsewhere.

The Ultra boasts a whopping 6.8in QHD+ AMOLED screen compared to the 6.1 and 6.6in displays of the S22 and S22 Plus. All three phones have the smartphone spec du jour; a variable refresh rate up to 120hz.

The Ultra’s camera setup doesn’t mess about, with a 108MP wide snapper, a 12MP ultrawide and two 10MP telephotos with different levels of optical zoom. There’s also a 40MP selfie-cam, and all of them benefit from improved AI that processes up to four times more data when you take a photo, sharpening detail and reducing noise. And as you’d expect, the S22 and S22 Plus boast a triple camera with a 50MP main lens, 10MP ultrawide and 12MP telephoto.

Portrait mode now benefits from an AI Stereo Depth Map, which separates the subject from the background more naturally and stops people looking like cardboard cutouts.

Latency on the S-Pen has also been reduced from 9ms to 2.8ms, plus the AI can predict where you’re going to draw next. That should make the stylus feel smoother in use.

All three phones ship with Android 12 underpinning the latest 4.1 version of Samsung’s OneUI. 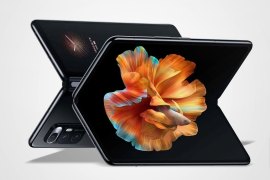