From lightweight party starters to beefy boomboxes, this list features our best Bluetooth speaker picks for sharing good vibes as you go. We’ve tested every model in a range of real-world situations, to sort the sweet-sounding wheat from the sonic chaff. Because tinny tunes can get in the bin.

Your kitchen. The lounge. Your regular patch in the park. Almost any location can be improved with music. And if it’s portable soundtracks you’re after, this list of our best Bluetooth speaker picks will bring winning beats wherever you need them.

Looking for Bluetooth bangers on a budget? Check out our round-up of fantastic cheap speakers. But if you’re prepared to pay more for superior portable audio, the guide below has got you covered. The playlist’s up to you.

Our pick of the best Bluetooth speaker options to buy today

If your best-selling Bluetooth speaker isn’t broken, why mess with the recipe? Luckily, JBL knows just what to tweak without souring the fantastic flavour of its Flip series. Lightly rebranded in line with the rest of JBL’s range, the Flip 6 is a familiar fabric-wrapped cylinder capable of superb wireless sound.

A smidge heavier at 550g, the Flip 6 is still perfectly portable. Power and Bluetooth buttons live on the back with the battery indicator, while the play, volume and PartyBoost controls continue to sit on top. Battery life remains respectable at 12 hours, while water resistance has been boosted to IP67 for improved pool-proofing.

Like the Flip 5, it features passive radiators at either end. And like the Flip 5, it gives lovely weight to low frequencies, balanced with crisp mids and bags of detail. But Flip 6 also has substantially more oomph and volume than before, delivering a punchy, dynamic performance, while also building on the spacious soundstage of its predecessor. Plus you can now tweak EQ levels through the JBL Portable app.

Building on everything that was brilliant about the Flip 5 before it, JBL’s latest cylinder adds extra oomph to set a new Bluetooth benchmark

Styled like the amps that made Marshall’s name, the second-gen Emberton certainly merits its position in our best Bluetooth speaker list and what’s more, it doesn’t need a team of roadies to shift it. Built small but mighty, its compact proportions are complemented by a premium finish – complete with metal grilles front and back. But don’t let its palm-sized form factor fool you: the upgraded Emberton II packs more punch than ever.

With reliable Bluetooth 5.1 connectivity, enhanced IP67 waterproofing and a beefier battery good for more than 30 hours, its feature list is as solid as Motörhead’s back catalogue. And like a gig-ending encore, there’s more: Stack Mode means you can sync a tower of Emberton IIs, while the partner app lets you tweak the EQ.

Sonically the same as its predecessor, it remains worthy of a headline slot. Two 2in full-range drivers team up with a pair of passive radiators to fire room-filling sound in all directions, with True Stereophonic tech eliminating sweet spots. Bass is rich without drowning out details, matched by captivatingly clear mids and crisp trebles to boot. Even dialled up to 11, the listen remains balanced but energetic, whatever genre’s on your playlist.

Sonos has tried portable speakers before, but the Roam is the first that you can properly sling in a satchel. Sensible proportions, Bluetooth connectivity and reduced reliance on the Sonos app make it perfect for partying anywhere, while Wi-Fi means it’ll still play nicely with existing Sonos kit.

Positioned upright or longways, the understated shell isn’t shouty in the design department. But thanks to a metal, plastic and rubberised finish, the rugged Roam can take a bit of a battering. What sets the speaker apart is clever stuff like Auto Trueplay: the Roam will tune its soundstage to suit the environment, whether inside or out. Sound Swap can also switch audio to the nearest Sonos output in the vicinity.

For a speaker of this size and form, sound quality is impressive. Higher frequencies can lack some clarity, but there’s a nice balance in the mid-range. One thing it has in spades is base: there’s incredible low-end oomph for something so compact. Arguably too much on certain tracks, although it’s nothing an EQ tweak can’t address.

There are better-sounding rivals, but the Sonos Roam offers an unbeatable blend of versatility and portability

Lightweight speakers are easy to tote. But when you need some boom to shake the room, it’s time to call in the heavies. Enter the JBL Charge 5: beefy at 960g, the fabric-skinned cylinder is waterproof, grippy on the bottom and big on low frequencies.

Its larger dimensions make space for a long-excursion driver, a separate tweeter, plus 65mm passive radiators at either end. Besides being fun to put your finger on, these vibrating caps assist in delivering rich bass to accompany crisp mids. There’s also room for a 20hr battery inside, which should be enough to see you through even the longest of get-togethers.

Keen to go bigger? PartyBoost allows you to sync several JBL speakers wirelessly, for a playlist that really fills the house. Controls are kept to a minimum and you won’t find fancy equalisers in the JBL Portable app. Bluetooth 5.1 connectivity does mean you can pair two devices at the same time (to battle for DJ supremacy), though there’s no 3.5mm input for old-school mixmasters.

UE made its name delivering quality sound at reasonable prices. Launched in 2020, the Boom 3 is still one of the best Bluetooth speaker options, offering a solid set of features without breaking the bank. That familiar big-button cylinder is as tough as ever: UE put it through drop, dunk and durability tests to check it’ll keep bringing the beats. And with a 15-hour battery life, it should certainly do that.

Sound is vigorous, if not as weighty at the low-end as some rivals. Audio is well-controlled, with no shortage of power when the party calls for extra punch. Mids and trebles are lively, without ever sounding harsh.

It’s worth downloading the Boom app to unlock a few extra features and settings – PartyUp in particular. This allows you to connect up to 150 Boom speakers for a serious shindig (or just two, for a stereo effect). You can also use the smartphone software to programme the Magic Button on top of the speaker, for one-touch access to your favourite playlists.

B&O’s second-gen Beosound A1 looks identical to the first. Which is no problem at all, given that the pearl-blasted aluminium chassis is still the definition of classy design. And while it asks a lot of your wallet, it does plenty to justify the outlay.

Rated at IP67, the updated edition is more waterproof than before. But the bigger revisions are hidden inside: redesigned audio drivers and Bluetooth 5.1 deliver enhanced 360 sound, maxing out at 92dB loudness. Feeling flush? You can buy two and pair them in stereo, with the option to personalise EQ settings through the B&O app.

Performance is as refined as the styling, with toe-tapping punch and bass that’s confident without overpowering. Despite the A1’s compact size, it delivers weighty but controlled rumble. Clarity is the defining feature: mids are crisp, detailed and expressive, with well-handled treble rounding out a cohesive sound.

Top of the budget bracket, B&O’s aluminium disc is a premium speaker with sound to match

If it ain’t broke, Bose won’t fix it: that’s the lesson taught by the second-gen SoundLink Revolve. It’s a still a stylish cylinder with a sturdy aluminium body and silicone control panel (complete with multi-function button that summons your smartphone’s voice assistant). And it still features a minimalist grille around its circumference.

So what’s new? Battery life has increased to 13 hours, while waterproofing is boosted to a full IP55 rating. But that’s all secondary to the listening experience. The SoundLink Revolve II has a big, bold voice that can easily fill all corners of a room. There’s no option to fiddle with EQ levels – but that’s fine because it doesn’t need much tweaking. The neutral sound profile swerves the temptation of beefy bass in favour of something more balanced.

That’s not to say it has no low end, though: there’s power on tap to drive tracks forward with punch and excitement. The spacious soundstage makes room for a good amount of detail and dynamism too, even if some focus is lost in the mid-range.

Audio purists put in your earplugs: this Sony speaker came to party – and there’s plenty of bass to go around. Among the heaviest speakers in this list, the SRS-XB33 takes the Texan approach: from the bass to the dimensions, everything’s bigger.

Shockproof and IP67 rated, this is a speaker that can take the tunes almost anywhere. It can withstand saltwater as well, so beach bashes are back on the menu. The Party Connect feature gives you the option to hook up any number of Extra Bass speakers for even more rumble, while the built-in strips can shine in sync with your music – making this one of the best Bluetooth speakers for disco junkies.

As subtle as a ten-gallon hat, Sony’s boombox is big, bold and all about that bass

Serious about larking in the park? This B&O cylinder is built for alfresco audio. Shipped with an aluminium carabiner for easy backpack attachment, the anodised aluminium shell is scratch-resistant and all set for a splashing. Reassuringly weighty, it stops just short of hefty.

Not only do its full-round grille lines look the business, but they also allow omnidirectional audio. Listen at home and bass feels a bit heavy-handed, with 360 projection beefing up mids at the expense of fine detail. But go roaming and the Explore makes more sense.

Designed for outdoor soundtracks, the Explore is among the best Bluetooth speakers for garden grooving. Its presentation becomes more balanced in the open air, with that mid-range weight helping it sound more solid. Crisp treble ensures the top end isn’t lost, providing a healthy dose of drive. And it can reach the top of its volume allowance without losing its cool.

Equal parts rugged and refined, this sturdy cylinder is ideal for alfresco audio 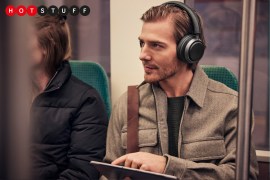