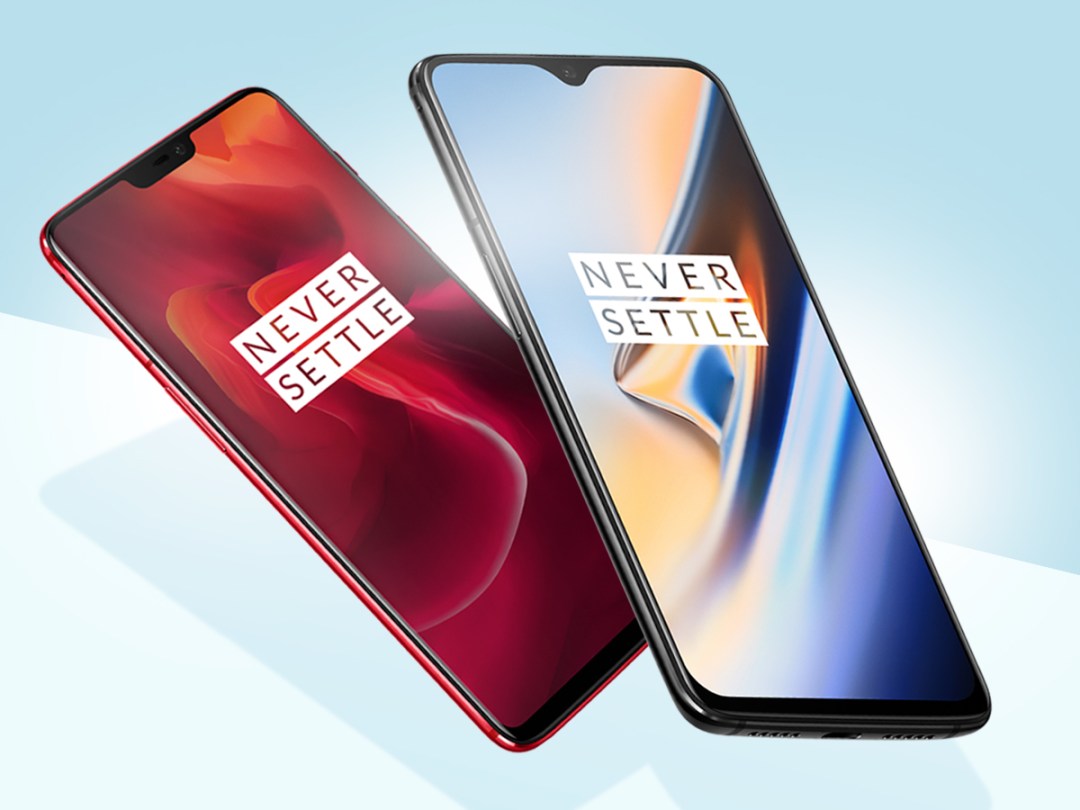 More so than any previous OnePlus revision model, the OnePlus 6T makes pretty significant tweaks to the design and functionality, delivering a new phone that’s more appealing than the last in a couple of key ways. But in other ways, it’s much the same as the OnePlus 6.

Need a little more insight than that? No problem: read on ahead for the full scoop on what sets these sweet smartphones apart.

From the front, there’s one big, obvious change: the notch has shrunk.

While the OnePlus 6’s notch was still smaller than the iPhone X‘s (due to the lack of 3D face-scanning sensors), the OnePlus 6T strips it down to a teardrop size, much like the one you’ll see on the Huawei Mate 20. That means you’ll get almost all screen on the front, aside from that slim "chin" of bezel at the bottom.

From the back, though, the OnePlus 6T is very close to the OnePlus 6 aside from the removal of the fingerprint sensor – more on that in a moment. And the overall size, shape, and feel are about the same. However, you do lose the headphone port with the OnePlus 6T, which is disappointing.

The shrunken screen notch can make your everyday usage a little more immersive, but overall the screen here otherwise isn’t much different. It’s a 6.42in Super AMOLED panel, whereas the OnePlus 6 used a 6.28in version of the same. That 0.14in difference barely registers, given the familiar feeling of the handset.

It’s a very nice 1080p display, albeit not nearly as crisp as the Samsung Galaxy S9, and the colour accuracy can’t match the pricier flagship displays of Samsung or Apple. But for the price, it’s still very good, plus the option for more natural colouring will surely be appreciated by some.

And surprise: there’s a fingerprint sensor built into the display of the OnePlus 6T now. It’s even speedier than the one on the Huawei Mate 20 Pro. While it was hardly essential to kill the back-mounted sensor in favour of this one, it provides an extra bit of tech bragging rights for 6T buyers. We’ll see in-display sensors on a lot more phones in the coming months, but for now, it’s a pretty unique perk.

Rumours suggesting a triple-camera setup on the OnePlus 6T were unfounded. Ultimately, the new handset uses the same back camera setup as the last one.

Both phones have a 16-megapixel main sensor flanked by a 20MP secondary one, and the results are very good but hardly the best you can buy. As noted in our OnePlus 6T review, "It doesn’t have as great a zoom as the Huawei Mate 20 Pro, the HDR contrast of the Pixel 3 XL or the indoors lighting noise handling of the Galaxy Note 9."

However, all of those phones are much more expensive. The key takeaway is that it’s quite fine for the price, but spending a lot more cash will understandably bring notable benefits.

The front-mounted selfie sensor does see a bump from 16MP to 20MP on the OnePlus 6T, but any improvements are very minor indeed. The results are "perfectly decent," we wrote in our review, but the Pixel 3 XL’s front-mounted shooters capture more definition.

Performance: Return of the Snapdragon

It’s exactly the same here in terms of hardware: both phones run the Qualcomm Snapdragon 845 processor with either 6GB or 8GB RAM depending on model. That’s the fastest Snapdragon on the market right now, although Samsung’s Exynos 8910 chip and Huawei’s new Kirin 980 both can reach higher heights in benchmark tests.

Even so, that’s plenty of speed for apps, games, media, and anything else you can throw at either phone. The OnePlus 6T ships with Android 9 Pie and a new version of OnePlus’ ColorOS interface, which looks quite clean in usage.

You lose the headphone port on the OnePlus 6T, as mentioned, but that omission seemingly freed up extra space for a larger battery: it’s up to 3,700mAh, from 3,300mAh in the OnePlus 6.

That’s not a huge bump, and the slightly larger screen probably eats up some of that extra capacity, but you might eke out another hour or two of uptime. Hard to argue with that. Neither phone offers wireless charging, however, which would only boost the price tag in the process.

The OnePlus 6 started at 64GB internal storage, with 128GB and 256GB options available, but the OnePlus 6T shaves off the lowest choice: you’ll get 128GB in the cheapest model, or you can pay extra to double the capacity. There’s still no microSD support here, unfortunately.

All told, the OnePlus 6T provides some nice enhancements over the OnePlus 6T, from the smaller notch and slightly larger screen to the in-display fingerprint sensor and larger battery within.

Are those essential upgrades over the OnePlus 6? No, we don’t believe so. With the same processor, same main camera setup, and mostly-similar design, the OnePlus 6T still remains a revision of a six-month phone even amidst some notable tweaks.

If you’re in the market for a new phone and want something on the level of a flagship without spending upwards of £800+, then the OnePlus 6T is undoubtedly a fantastic pick. But if you just bought the OnePlus 6, then we’d advise you to enjoy the excellent phone you have and wait for the next mainline model.