After a few busy months of leaks, we’ve arrived at the start of the tech season. Kicking off the period of events and product launches is Samsung, with the new Unpacked event for August. Samsung fans will have plenty of new goodies to get their hands-on.

The Unpacked event is just days away, taking place on 10 August. We’re expecting new foldable phones by way of the Fold 4 and Flip 4, a new Galaxy Watch 5, and an update to Samsung’s Galaxy Buds Pro. The brand is promising the “next generation of groundbreaking foldable smartphones”. If you’re keen to see what’s new from the brand, it’s worth tuning in to the event.

How to watch Samsung Unpacked August 2022

The event kicks off at 2pm in the UK, or 9am ET/6am PT on 10 August. While there’s not been any sort of runtime confirmed, these types of events usually last for around an hour to an hour and a half. Perfect timing to watch over your afternoon brew.

Samsung will be live-streaming the event directly, which you can pick up on the brand’s website, on YouTube, or directly below from the stream.

Of course, we’ll be right here to bring you all the latest from the event. We’ll have coverage of all the new devices, and you don’t want to miss it.

What to expect from Samsung Unpacked August 2022

There’s been no shortage of leaks around what to expect from the Unpacked event. We’ve got a pretty good handle on what devices Samsung is going to show off. The brand’s own promo materials even show the foldables!

Samsung Unpacked’s main attraction is likely the Galaxy Z Fold 4. The book-style foldable is set to see improvements to the crease line, camera, processor, and display. It’ll take the same form factor as the current Fold 3, so we’re getting more of a minor refresh. The clamshell Galaxy Z Flip 3 is set for similar treatment, with bumps to the CPU, battery, and charging speeds coming in the new Flip 4.

If you’re looking for a more detailed look at each of the new devices, we’ve dived into them all:

IFA 2022: all the latest news from Europe’s biggest tech show

Back as a physical event in 2022, there are stacks of new product launches for you to discover from Berlin’s big tech expo 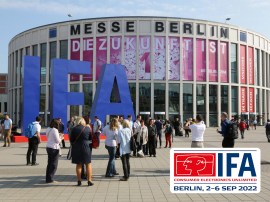