If you’ve been after a pair of Apple AirPods Pro, there’s no better time. From Amazon US, you can get 36% off – $159 rather than $249. They’re no longer available from Amazon UK, but you can grab them from Currys for £199, so that’s £50 off from where they were originally.

The earbuds have been steadily falling in price over the last year or so and this is very nearly the cheapest they’ve been, complete with MagSafe charging case. It’s rare to see too many discounts on Apple products, but AirPods have bucked that trend for the last year or so. Our original AirPods Pro review saw Apple’s earbuds awarded a perfect 5/5 star score, noting that the Pros are a “huge step up” from Apple’s plain ol’ AirPods and praising their noise cancellation, versatility, and convenient feature set.

The AirPods Pro are a further leap forward, promising (among other things) even better battery life and deeper bass, while retaining their predecessor’s best features – not least Transparency Mode.

This super cool feature allows you to switch from noise-cancelling mode to tuning back into the outside world just by cupping one of the pods – especially useful for commuters and city dwellers needing to quickly be able to hear what’s going on around them.

Of course, the original AirPods Pro have now been superseded by the Gen 2 version and there’s a small Gen 2 price drop available at Amazon, too. You can get them at Amazon UK for £229 rather than £249. And at Amazon US there’s an even greater saving, as they’re $199 instead of $249. 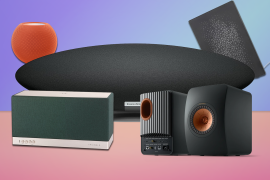