If Lomography’s selection of oddball film cameras weren’t quite colourful enough for you, here are two new special editions that are sure to turn heads. The impressively named Fisheye No. 2 Acapulco La Quebrada and La Sardina Camera & Flash Acapulco Caleta are properly beach-ready, with a flashy fabric finish that’ll raise a smile even if the sun isn’t shining.

Both models were apparently inspired by the shorelines of Mexico, and each one uses fabric cut from a different piece of cloth, so no two cameras are identical. They each swallow 35mm film and put their own spin on analogue photography. The La Sardina Camera has a 22mm focal length and giant external “Fritz the Blitz” flash attachment for shooting in all lighting conditions, while the La Quebrada has a 10mm fisheye lens and built-in flash.

The Fisheye is the simpler of the two, with no tripod thread or cable release, and needing a single AA battery to keep the flash powered up, but can get as close as 10cm away from your subject.

The La Sardina can trace its heritage back to the Irwin Kandor Candid camera of the 1930s, which was designed around a sardine can – hence the name. It takes a CR123A camera battery, and promises a 0.65m focusing distance.

Like the majority of Lomo’s range, the two cameras pack in a few creative shooting modes, including multiple exposure stacking and long exposure bulb modes.

They play nicely with Lomography’s extensive range of 35mm film, which will set you back around £25 for a pack of three. Your only challenge should be finding somewhere that can develop it – although as ever, the internet is your friend here.

Both cameras are available to buy directly from the Lomography website now. The Fisheye No. 2 will set you back £69, and the La Sardina costs £109.

Give your shots the wet look 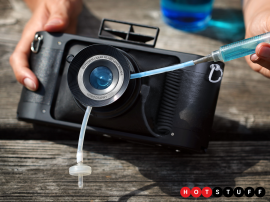