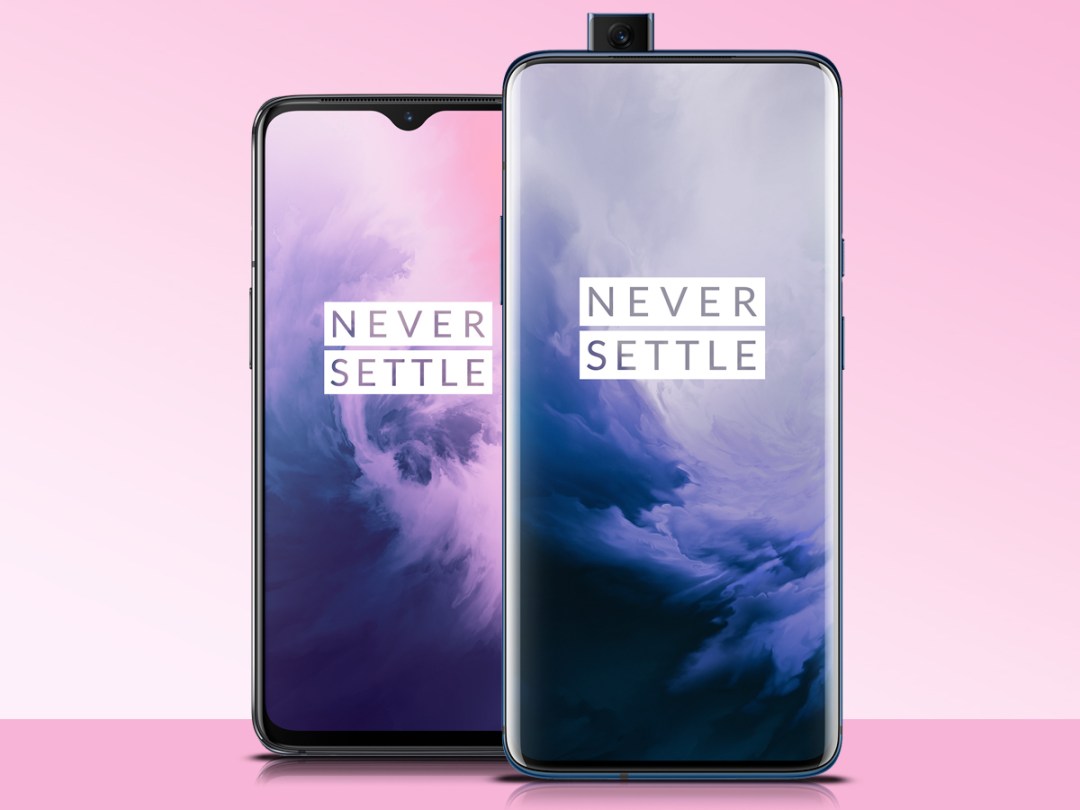 The OnePlus 7 is a familiar-looking OnePlus phone with a largely familiar feature set and even a familiar price point to match. The OnePlus 7 Pro, on the other hand, is none of those things.

OnePlus has earned its well-deserved place in the industry by offering a flagship-quality smartphone experience at a price often hundreds of pounds less than the competition. The OnePlus 7 Pro still does that, but now it’s emulating the kinds of super-premium flagships that pack in ultra-luxe features and either brush up against or blow past the £900 price point. Only OnePlus does it for less, of course.

Despite the similar naming conventions here, these are significantly different handsets. What sets them apart, and which is more likely to be right for your pocket (and wallet)? Here’s what we think, now that we’ve reviewed the OnePlus 7 Pro.

Design: Not the same

These are both sleek beasts, but the OnePlus 7 doesn’t bring much in the way of evolution from the OnePlus 6T. In fact, they’re nearly identical. That’s hardly a bad thing on its own, as the sleek aluminium-and-glass curves and small teardrop notch are plenty appealing, but OnePlus has clearly turned its attention towards the Pro this time around.

That’s obvious at a glance. The OnePlus 7 Pro is nearly all screen on the front, with no visible front-facing camera obscuring the face via a notch, punch-hole cutout, or large bezel. Instead, it’s tucked into a little pop-up module that emerges from the top of the phone only when you need it.

The OnePlus 7 Pro is also a fair bit curvier along the edges, plus it offers attractive Nebula Blue and Almond colour options alongside Mirror Gray. Meanwhile, the OnePlus 7 is only launching in that Mirror Gray for now – at least in the UK. There’s a Red handset in select markets, as well, but it’s not mentioned in the UK press release.

OnePlus has never pushed past the 1080p resolution barrier as a cost-saving move – Quad HD panels are more expensive, and that would’ve disrupted the company’s whole approach. Well, until now.

Of course, the standard OnePlus 7 still sticks with a 1080p Optic AMOLED panel, again at 6.41in just like the OnePlus 6T. But the OnePlus 7 Pro opts for a new Fluid AMOLED panel at 6.67in, and it’s not only higher-resolution at Quad HD resolution but also a 90 Hz refresh rate for smoother animations across the board. And since it’s a Samsung panel, it looks fantastic.

The OnePlus 7 Pro jumps on the triple-camera bandwagon (right as the world’s best smartphone adopts a fourth…), while the OnePlus 7 sticks with two – but it still brings a serious upgrade from the 6T.

This time around, both cameras use a massive Sony IMX 586 48-megapixel sensor for the main camera – the same seen in the Honor View 20. It impressed there, and it’s sure to do the same here. With the standard OnePlus 7, you get a 5MP secondary sensor alongside to provide depth data, much as it has with previous OnePlus models.

But the OnePlus 7 offers a triple-camera array that’s closer to what you’ll find on the Samsung Galaxy S10, for example, with an 8MP telephoto lens for a zoomed-in view, as well as an ultra-wide-angle lens for what you might call a "zoomed-out" view. It feels a lot more versatile as a result, much like the GS10 does, and we called it "one of the best phone cameras out there, and a league above the OnePlus 6T."

As for the front, you’ll get the same 16MP Sony sensor on both – one just sits there ever in sight, while the other pops up on command. It’s a fun trick, plus it makes the screen a lot more immersive without that teardrop notch.

You shouldn’t see much of a difference here. Both phones use Qualcomm’s current flagship Snapdragon 855 chip, as seen in a few other recent top-end phones, but there is a possible difference between models due to the amount of RAM.

The standard OnePlus 7 comes in versions with 6GB or 8GB RAM, while the OnePlus 7 Pro is offered in 6GB, 8GB, and 12GB RAM configurations. Do you really need 12GB RAM on a smartphone? We doubt it, but if you’ve got the cash and want the peace of mind, then go wild.

Both phones run the company’s OxygenOS skin running atop Android 9.0, and we found it to be "a plain and simple take on Android" in our OnePlus 7 Pro review. That’s no complaint: it’s speedy and doesn’t feel over-fussed.

The OnePlus 7 sticks with the same 3,700mAh battery pack as the OnePlus 6T before it, which provided a strong day’s usage with a little breathing room. The OnePlus 7 Pro goes a bit higher at 4,000mAh. That’s a sizable battery, although the very large 90 Hz Quad HD panel could drag down your charge a bit faster than the standard OnePlus 7. We’ll have to see once we review the OnePlus 7.

Neither offers wireless charging, in typical OnePlus fashion, although both have wired fast-charging. Both phones do have an in-display fingerprint sensor, however. Unfortunately, neither phone offers a microSD port for expandable storage, so you’re stuck with whatever internal tally you pay for – either 128GB or 256GB on both.

We haven’t gone hands-on with the OnePlus 7 as of this writing (soon!), but we have reviewed the OnePlus 7 Pro – and it’s a corker. It’s a major improvement over the already-excellent OnePlus 6T, but that’s no surprise given the premium upgrades.

The £649+ price tag will take some OnePlus fans by surprise, but the company justifies it. Better yet, that’s still a lot cheaper than many rival phones with Quad HD panels and top-tier specs. It’s not as feature-packed as the Huawei P30 Pro, but at £250 less, it’s the "budget" high-end flagship alternative. There’s also a 5G model coming, but we don’t have a price point or release date for that one just yet.

Meanwhile, the OnePlus 7 comes in at the same £499 price point as the OnePlus 6T before it, thankfully, but it can’t help but feel a bit unexciting given not only the repeated design but also its super-powered sibling. Still, it’s sure to be an impressive handset, and quite possibly the best phone you can snag for under £500. We’ll know very soon.