Home / Features / Eyes-on with The Eye Tribe: we play Fruit Ninja using nothing but our eyeballs 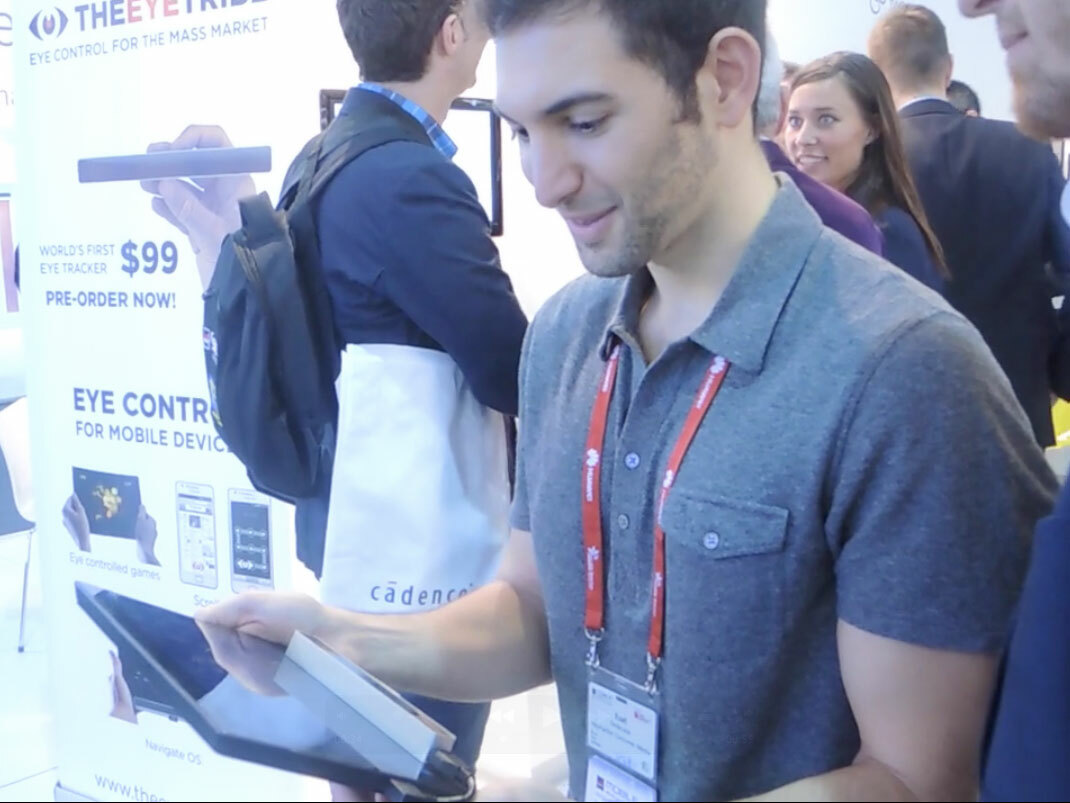 Smartphones and tablets aren’t the only treasures to be discovered here at Mobile World Congress.

Tucked away in one of the massive halls is Danish company The Eye Tribe, and its eye-tracking demo has turned many a head here in Barcelona, including ours.

The Eye Tribe’s ultimate aim is to bring eye-tracking control to the masses at a far more affordable price than traditional existing technology which remains expensive and inaccessible to consumers.

Currently the company is selling a US$99 eye tracker along with an SDK for developers to start incorporating the technology into their apps.

Anders Bo Pedersen, Mobile lead and Partner and The Eye Tribe told Stuff that the company’s ultimate aim is to license their software to manufacturers, who will already have the hardware built into it their devices.

How does it work?

Like the Leap Motion, the Eye Tracker uses infrared red light to work its tracking magic. If you’ve seen footage of people’s faces being recorded with a night vision camera, you’ll notice how brightly their eyes reflect the light, and that’s how the Eye Tracker is able to detect where you’re looking.

It’s accurate enough to track an area the size of a fingerprint after a brief calibration is set up, and you can then use your eyes to navigate around an OS.

Currently only Windows is supported for consumers, but an OS X version is expected in April. We were shown an microUSB Android attachment nicknamed ‘the dice’, and the Android SDK will be available later this year.

Scarily accurate. The calibration takes around ten seconds and involves you looking at circles that pop up around the display. You can’t massively change the angle of how you hold the tablet after calibration, but there is still a decent amount of leeway.

Looking at icons on a desktop instantly highlights them, and you can then tap anywhere on the screen to open up the selected app. We’d prefer it if a long blink was used to open up selections instead, but we don’t see why a few lines of code in an app can’t add that functionality.

Firing up Fruit Ninja really shows off the accuracy of the tracking. Our eyes seemed to move faster than our brain could even think, slicing up fruit the instant it appeared on the screen.

It’s an eerie sensation, almost as if we being remotely controlled by a powerful entity, and it left us very impressed.

Creating combo chains proved to be a little difficult, almost as if our eyes were being tracked too well, but tweaking the sensitivity during calibration should be easy enough allowing for finer control.

We left The Eye Tribe’s stand feeling rather excited. The technology works, and from our brief time spent with it, it appears to work well.

It’s also not a massive stretch to incorporate it into future tablets and smartphones. The IR emitter isn’t expensive, and front-facing cameras on smartphones are good enough to track our eyes already.

The Galaxy S4 demo unit we were shown had to have its front-facing camera’s IR filter removed before it could track our eyes, but the hardware is cheap enough to make it accessible for future PCs, smartphones and tablets.

Imagine a Kindle which lets you turn the page by simply looking at the bottom right corner. Or logging into a PC simply by looking at different parts of a photo in the correct order. The possibilities are endless, and we’re can’t wait to see more.

Advertisers will of course be interested too. Pay-per-look ads on sites could also become a real possibility, though we’re not sure how comfortable that would make users feel.

We’ll be keeping tabs on The Eye Tribe’s progress so stay tuned for news in the near future.

READ MORE: Stuff Backstage: this is what life is really like at MWC 2014