Star Wars Day 2022 – May the 4th – is an excellent excuse to splurge on the best Lego Star Wars sets.

We’ve rounded up our favourites, so you can construct your own blocky takes on scenes from a galaxy far, far away – whatever your budget.

If you’re going to splash out on just one Lego kit that costs as much as a phone, choose Millennium Falcon (7541 pieces, £699.99). The iconic ship is reimagined as a whopping 83cm long Lego model, packed with details.

Although primarily a display piece (unless you’re mad enough to whoosh 700 quid of plastic through the air), there are plenty of minifig-scale areas for miniature adventures. Removable hull panels give original trilogy and episode VII–VIII crew (both are included) access to the cockpit, main hold, engine room and gunnery station.

Your Lego Darth Vader will be quaking his little black boots on seeing this one.

Should your allegiance – and your wallet – instead lie with the Empire, then go for Imperial Star Destroyer (4784 pieces, £614.99) and AT-AT (6785 pieces, £699.99). A mountain of grey parts combines to form, respectively, a 110cm-long replica of a fearsome vessel (and a dinky Tantive IV) or a colossal stompy metal beast filled with evil Empire types.

If your wallet’s now having palpitations that are nothing to do with nearby Sith doing that hand-squeeze trick, check out the more affordable Luke Skywalker’s Landspeeder (1890 pieces, £174.99) – the first Ultimate Collectors Series take on Luke’s battered X-34 Landspeeder. And if you fancy a display piece that’s even bordering on pocket-money friendly, try Imperial Probe Droid (683 pieces, £59.99), ready to hunt down any rogue minifigs hiding in your gaff.

The Ultimate Collectors Series AT-AT is great, but liable to trample your bank account into oblivion. Fortunately, the smaller scale AT-AT (1267 pieces, £139.99) still manages to be a piece of stompy magnificence. Along with a bunch of Empire types, you get Luke Skywalker – and a speeder bike the minifigs can all squabble over.

Elsewhere, if the pricier take on Han Solo’s iconic ship feels like a punch in the bank account, Millennium Falcon (1353 pieces, £139.99) should be more palatable. It’s based on The Rise of Skywalker’s take, but looks fab. Prefer keeping your Lego on the ground? Get yourself a wretched hive of scum and villainy with Mos Eisley Cantina (3187 pieces, £309.99), where Han and Greedo can both fire first. Or something.

Want more swoopy greatness? Boba Fett’s Starship (593 pieces, £44.99) nets you the famous bounty hunter’s craft in its Madalorian incarnation – although you can always pretend it’s from the original trilogy by hiding the included Mandalorian minifig down the back of the sofa.

Similarly aiming for those whose hearts lie with the original trilogy, you can get your swoosh on with Imperial TIE Fighter (432 pieces, £34.99) – a surprisingly dinky and wallet-friendly take on the iconic ship. And if you prefer it when the Dark Side lets a little light in, try the shiny and white Imperial Shuttle (660 pieces, £69.99), with Darth Vader, Luke Skywalker and an unnamed Imperial Officer who’s just happy to be there.

The Mandalorian was why you first subscribed to Disney+ without blinking. From that, we get The Mandalorian Bounty Hunter Transport (1023 pieces, £114.99) a.k.a. Razor Crest a.k.a. often looking a lot like a pile of Lego pieces in the actual series. Seriously, Mando: look after your craft – they’re expensive! If you prefer its sleek replacement, go for The Mandalorian’s N-1 Starfighter (412 pieces, £54.99), and spend happy times creating that grin-inducing moment from the very end of The Book of Boba Fett.

Hoth AT-ST (586 pieces, £44.99) takes us back to the original trilogy again, for a brick-built take on Empire’s ‘blink and you’ll miss it’ chicken-walker appearance. Chewie’s included, apparently thinking he can take on an entire armoured vehicle with his hand-held weapon. That’s confidence! Give him some back-up with Luke Skywalker’s X-Wing Fighter (474 pieces, £44.99).

Death Star Trench Run Diorama (665 pieces, £54.99) kicks off a new line of Star Wars Lego dioramas, cunningly aimed at folks captivated by the original trilogy upon its release, and now all grown up with money to spend. It features lots of dinky grey pieces you use to fashion a piece of Death Star, including a chunky gun emplacement. Centre stage is Luke Skywalker’s X-wing, with a trio of TIE fighters in hot pursuit. The force will be strong with this one – assuming you don’t drop it on the floor.

Death Star Trash Compactor Diorama (802 pieces, £79.99) is from an earlier point in A New Hope, and gives you the means to sadistically crush minifig Luke Skywalker, Han Solo, Chewbacca and Princess Leia Organa, while C-3PO and R2-D2 squabble on the sidelines. Meanwhile, Dagobah Jedi Training Diorama (1000 pieces, £69.99) fast forwards to Empire, and features Yoda supervising Luke while he hangs upside down and whines about training. R2-D2 looks on, presumably wondering if he could get that sunk X-wing into the air and zoom off, just for a quiet life.

Dark Trooper Attack (166 pieces, £24.99) is not part of the diorama wave, but has similar vibes. It lets you recreate the scene where an older, wider, uncanny valleyier CGI Luke slices up some baddies. Run, Lego Dark Troopers, while you still can!

R2-D2, it is you – it is you! Well, in brick form at any rate. R2-D2 (2314 pieces, £174.99) is the most impressive and detailed Lego recreation of everyone’s favorite Star Wars droid (sorry, C-3PO). It also comes with a standard R2-D2 minifig – which presumably has a massive inferiority complex.

Nice model of the famous Jedi, Yoda (1771 pieces, £104.99) is. A whopping 1771 pieces go into making this 41cm tall statue, which has a massive lightsaber, and – most importantly – posable eyebrows. Want a shorter, cheekier, cuter take on ol’ green ears (well, someone of the same species at least)? Then try The Child (1073 pieces, £69.99) instead. (Just don’t make him angry or he’ll bounce you off the ceiling.)

Should the notion of building an entire humanoid figure feel too much like hard work, there’s Lego’s helmet range. This is designed for adult builders – or kids who presumably like the idea of what appear to be detailed decapitated heads of bad guys on their shelves.

If you lack deep pockets – or deep shelves – or just fancy grabbing a smaller set for a youngling, here are the best options for under thirty quid.

Trouble on Tatooine (276 pieces, £24.99) finds The Mandalorian and his speeder bike facing off against a grumpy Tusken Raider whose ballista is bigger than his house. Snowtrooper Battle Pack (105 pieces, £17.99) takes us to snowier climes, with a set that goes very nicely with either of those AT-ATs we featured earlier. And 501st Legion Clone Troopers (285 pieces, £24.99) gives you a bunch more bad guys to ruin everyone’s fun.

Heading into ‘Lego does cute’ territory, The Mandalorian & the Child (295 pieces, £17.99) gives us adorable brick-built versions of the lead characters in the hit Disney+ series.

Fancy a spaceship battle instead? Then have Han Solo swoop to the rescue in Millennium Falcon Microfighter (101 pieces, £8.99), while banging on about making the Kessel Run in less than twelve parsecs, thereby giving astrophysicists something to endlessly grumble about. 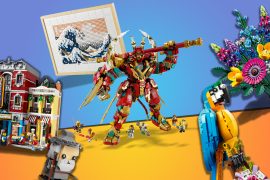 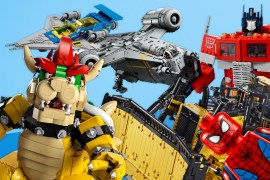