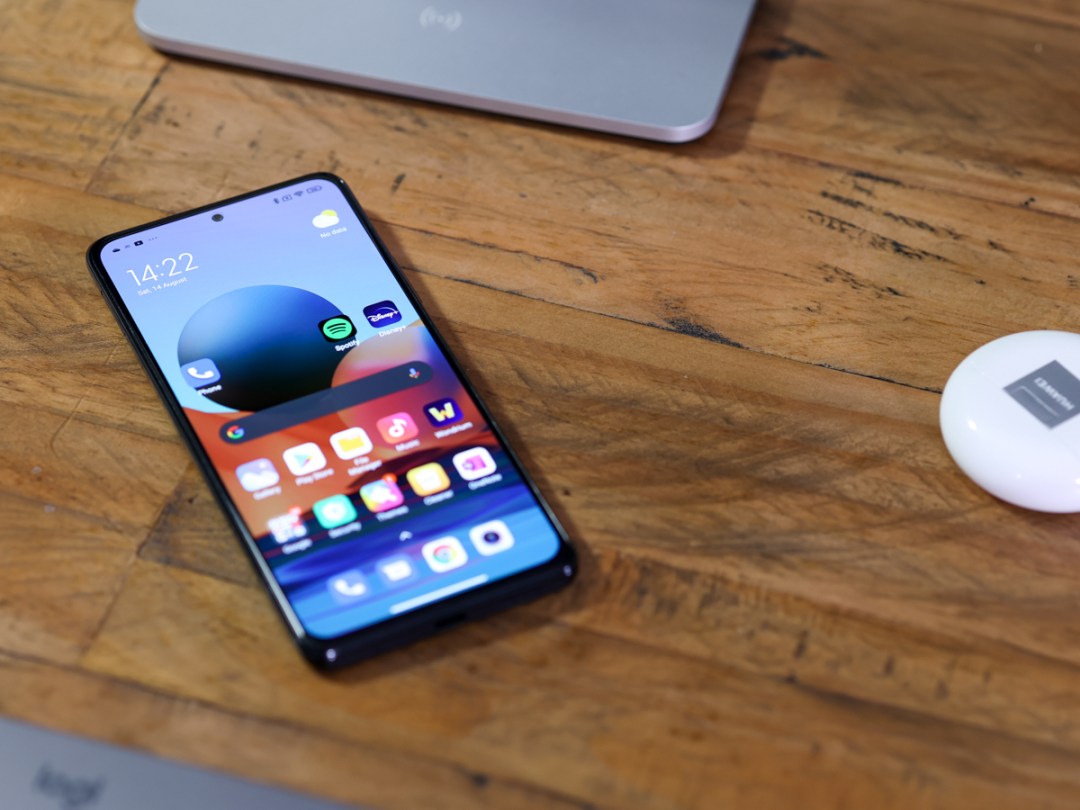 The Redmi Note 10 Pro doesn’t make sense on paper. The 128GB model costs just £239, despite the fact it’s an absolute spec demon. What’s going on? And what’s so spec-ial about it?

For starters, it’s got a smooth 120Hz screen to match the Samsung Galaxy S21, paired with punchy AMOLED tech. At 108MP, its camera is the highest-resolution snapper we’ve seen on a phone at this price. Plus the Note 10 Pro is loaded up with stereo speakers and a stonking big battery.

While its own-branded kit has been more about wow-factor (like the Xiaomi Mi 11 Ultra), Xiaomi’s Redmi line has always represented excellent value. But the Redmi Note 10 Pro proves there can be plenty of wow-factor in a low-cost superstar smartphone. What it lacks in 5G speeds, it seems to make up for in virtually every other respect. Surely there’s a catch?

You know those phones that look like glass but when you tap them, you realise they’re probably plastic? That’s the Redmi Note 10 Pro.

A sleek design with a high-gloss back rounds off into curved sides and a relatively flat top and bottom. The phone has a stepped camera bump which houses its four sensors, while up front is a big, 6.67in AMOLED DotDisplay. It’s attractive, if unremarkable.

Design highlights include a fingerprint scanner/power button combo which is curved to match the side of the phone. It feels slick to use and the general in-hand feel is great. The Note 10 Pro is weighty, without being Mi 11 Ultra levels of cumbersome – and its still curvy enough to not be clunky.

The screen is a Full HD panel that’s sharp at 395 pixels-per-inch and pops brilliantly thanks to AMOLED tech. A peak brightness of 1200 nits means the display shines nice and bright, but what really edges it ahead of the similarly priced competition is its silky smooth 120Hz refresh rate –outperforming £400+ 90Hz phones like the OnePlus Nord 2.

Whether you’re streaming videos or gaming on the Redmi Note 10 Pro, the viewing experience is virtually indistinguishable from many phones double its price. When you add stereo audio to the mix (plus a headphone port), losing yourself in a Disney Plus or Netflix series is a very real risk.

Big pixel counts don’t always mean better pictures, so the 108MP resolution sensor on the Redmi Note 10 Pro isn’t a guaranteed win. But it is unheard of at this price – and immediately grabs attention.

Helped along by an f/1.9 lens, the main camera is specced out with everything other than optical image stabilisation (OIS). It’s complemented by an 8MP ultra-wide camera (f/2.2), a 5MP telemacro camera (f/2.4), and a 2MP depth sensor (f/2.4).

The lack of OIS means the Redmi Note 10 Pro isn’t the best iteration of Samsung’s 108MP sensor; the Galaxy Note 20 Ultra and S21 Ultra wipe the floor with it in low light. Under £400, though, this is probably the best camera phone you can buy.

The wide aperture of the physically large main sensor ensures the Note 10 Pro’s photos pack impactful shallow depth of field. Colours pop nicely and detail is on-point, provided you keep your subject more than 25cm away from the camera.

If you do want to capture close-up shots, the telemacro camera is a welcome addition. Loaded up with 5MP resolution and autofocus, it’s capable of pulling out granular textures that other phones in this price bracket would simply miss – just check out the picture of the spider we snapped.

The ultra-wide camera isn’t a disappointment either, despite the absence of autofocus. While it’s definitely the weakest of the array, it’s still a handy addition to the mix – especially in well-lit outdoor scenes. But dim the lights and you’ll want to fire up the main camera, plus possibly night mode (which doesn’t work with the ultra-wide).

Digital image stabilisation has come a long way in the last few years, and it really helps the Redmi Note 10 Pro’s video along. Capable of recording footage at 4K (30fps) or 1080p (60fps), the results hold together very well compared to the competition, only really crumbling in low-lit scenes.

As for selfies, they’re snapped using the f/2.45 16MP front camera. Xiaomi’s aggressive beauty mode can be tuned to take super-flattering shots, while the portrait mode handles edge detection well for the most part.

How much do you need flagship power in 2021? Not as much as in the past, that’s for sure. The mid-range Qualcomm Snapdragon 732G in the Redmi Note 10 Pro keeps performance feeling snappy, helped along by that super-smooth 120Hz screen.

Even with Xiaomi’s heavy interface, the Redmi Note 10 Pro performs well. We ran brand-new games like the excellent Trials of Mana with no issues or choppy frame rates. Hardcore gamers will definitely want something with a bit more oomph, as Genshin Impact doesn’t run well on high graphics settings, but it plays back well enough at low to medium settings.

Running Android 11 topped by Xiaomi’s Mi UI 12.5 overlay, the Redmi Note 10 Pro showcases the same interface as the flagship MI 11 Ultra with only mild dilution. The gamer mode and optimisations, casting tools and display customisations are all present and correct, making for an even better value package than the specs alone suggest.

There are interface niggles you’ll come across after some time with the Note 10 Pro. The UI is quite cumbersome, there are adverts when you install apps that need to be manually turned off, plus some UI gremlins plague dark mode, with icons and text appearing invisible. On other Xiaomi phones, these drawbacks are judged with less leniency, but the 10 Pro’s sheer value makes these inconveniences much easier to stomach.

As for battery life, the Note 10 Pro’s 5020mAh battery is massive, easily lasting all day – and comfortably outsizing the cell inside the Samsung Galaxy S21+ 5G. It also outperforms Samsung’s finest when it comes to charging speed, with a 33W fast charger bundled in the box. That means you can get a full charge in just an hour and a half, roughly 40 minutes faster than the S21+.

The Redmi Note 10 Pro is available with 6GB RAM and 64GB or 128GB storage, or 8GB RAM and 128GB storage. The RRP for the latter is £279 – but since it launched, the most powerful Note 10 Pro has been available on Xiaomi’s website for £239, cheekily undercutting resellers. You’ll only save £10 by opting for the 64GB version, so we’d strongly urge you to stump up the extra tenner.

At that price, the Redmi Note 10 Pro slays the competition in virtually every respect. But if you absolutely need 5G, the Poco M3 Pro 5G dials back the camera power and screen quality, while delivering nippier data speeds.

With the cheapest iPhone SE costing £399, you won’t find an Apple handset anywhere near the Redmi Note 10 Pro’s region.

If you are prepared to pay a bit extra, care less about photos and more about power, then the Realme GT is probably the best Android phone in terms of power-to-price ratio, costing £390.

It’s hard to grumble when your £239 phone takes such excellent photos. The fact that the Redmi Note 10 Pro’s screen is also best in class, its stereo sound is great for the price and it lasts ages (plus charges quickly) easily clinches it the title of best budget smartphone.

There really is nothing out now that comes close – unless you need an iPhone, top-tier gaming power or just love spending money. So if you’re on the hunt for an affordable powerhouse handset, the Note 10 Pro should be high on your list in 2021.

Budget smartphones don’t get better than this

Best in class camera and screen