OnePlus has revealed the design of its upcoming flagship OnePlus 10 Pro phone, though if you’ve been looking out for it online, the design won’t have been a surprise.

As with every new OnePlus handset, full and highly accurate leaks appeared well in advance. We also knew previously that OnePlus would be skipping the OnePlus 9T name and powering straight to 10 and 10 Pro.

The new phone features a camera housing (again with Hasselblad branding) that wraps around the side of the phone slightly and has a reflective design to contrast with the rest of the matte design. It houses triple rear cameras and a flash. We now also know the phone will be available with two finishes – volcanic black and forest emerald (er, green).

According to OnePlus, the ceramic material used is 13 times tougher than glass.

Thanks to a previous OnePlus announcement, we already know that the handset will feature the hot-off-the-line Qualcomm Snapdragon 8 Gen 1 platform at its heart.

That’s not surprising considering top-end OnePlus phones always feature the latest Qualcomm Snapdragon chips. And there have been numerous other leaks, too.

As to when we’ll get more official info, the official OnePlus blog says the phone is ‘upcoming’ and we’ll leave it at that…

However, we already knew from a Weibo post by OnePlus chief Pete Lau that the OnePlus 10 Pro will be available in China in January and we now know this is set for 11 January. So it seems certain that the new phones will seek to launch fully sooner than Samsung’s upcoming Galaxy S22. 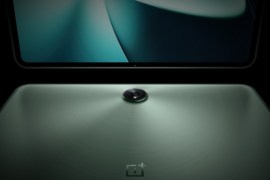