Considering all of the big Windows leaks, we started to wonder if Microsoft could still keep a secret. Guess so, since the company just dropped a megaton: the future of Windows is holograms.

Yes, holograms. It sounds and even still looks like science fiction, but Microsoft is betting big on the promise of wearable tech in a way that looks like a convergence of Google Glass and the Oculus Rift. And unlike the latter, you don’t need another device to use it.

Microsoft HoloLens is a standalone headset that projects high-definition 3D holograms into your world: a TV-like screen on a wall, a game world on your couch and coffee table, or a digital to-do list on the fridge. And those are just the more obvious uses.

Concept videos showed creators manipulating a 3D render of an object – say, a motorcycle – in real-time, or using a toolkit to build a toy rocket that could then be sent off to a 3D printer. Or you can Skype in a friend and have him or her help you with a current project, seeing what you see all the while. HoloLens is as much for work and everyday life as it is for gaming and entertainment.

The headset reacts to gestures, voice commands, and apparently eye movements as well, responding to your every action to intelligently place interactive holograms in the world. It also has spatial sound so you can “hear” holograms behind you.

But will you actually want to wear that thing out? It has see-through lenses, so you can still move through the world as normal; you’re not just staring at a video feed captured by an external camera. But the HoloLens unit showed today is still a pretty significant-looking device, and more obvious and obtrusive than Google Glass.

The video below shows some concepts at work from external studios, and the Windows Holographic tools built into Windows 10 will allow third-parties to create their own experiences for HoloLens.

When will it launch, and when can we expect it? A lot of that remains unclear. Microsoft says it’ll be available during Windows 10’s lifetime, which means it could still be some time off, and that it will be priced for both common consumers and enterprise (business) customers. Again, not much to go on.

But watch the videos, be amazed at the possibilities, and hope that the actual product – whenever it may launch – is anywhere near as cool as these demos.

READ MORE: Windows 10 will be a free upgrade – even for Windows 7 users 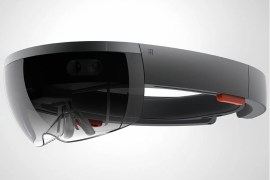 ZapBox is a Microsoft HoloLens for £25

Mixed reality hoots at a hundredth of the cost 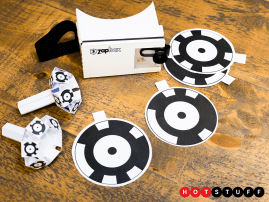