If you’ve ever scrolled through your smart TV for something to watch, you’ll appreciate Freeview Play’s newly-updated Explore Freeview Play TV app. The latest version now has new recommendation genres and a wish list feature so you can stock up on shows without having to search every time.

The redesigned UI puts hand-picked recommendations front-and-centre, adding food, music and arts, science and nature, and history categories to the existing line-up of comedy, drama and soaps, entertainment, factual, food, movies and lifestyle. It has been given a darker background, which should be nicer to your eyeballs when watching in a dark room, and larger imagery gives you a better glimpse at each programme before you hit play.

Creating lists of must-see telly can now be done in-app using the My Shows feature, bringing FreeView Play up to par with pay-to-watch streaming services like Netflix and Prime Video.

There’s also a new dedicated Box Sets section, putting the most bingeable content in one place rather than making you scroll through countless soap operas and daytime TV shows just to get to the good stuff.

Freeview Play has a whopping 40,000 hours of free-to-watch on-demand content, covering all the major UK TV channels including BBC iPlayer, ITV Hub, All 4 and My5. UKTV Play, CBS Catchup Channels UK, Legend and POP Player also make the cut. Having all those shows in one place is a big time saver compared to jumping in and out of multiple apps.

The service is built into most new UK TVs, including those from LG, Panasonic, Sony and Hisense. If you watch TV through an aerial, just head to channel 100. It’s also available on Android TV, Humax and Amazon Fire set-top boxes and streaming sticks.

Sky has announced a few new updates coming to Sky Glass, its TV which doesn’t need a dish 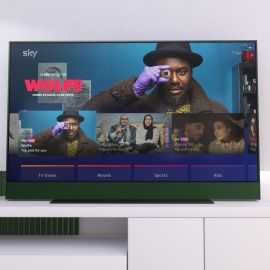