Samsung’s all-metal Galaxy A3 and A5 handsets which were launched in India earlier this week are likely to hit UK shores later this year.

Firmware versions for both phones are now available on Sammobile, and the UK is among the list of European countries on offer.

While the specs might not get your heart racing, both devices feature full-metal bodies for a more premium feel. The existing Samsung Galaxy Alpha does has a metal band that surrounds its edge, but its rear is still soft-touch plastic.

The A3 and A5 however, are the first Samsung smartphones to feature metal rears, and the thinnest smartphones the company has ever release, measuring in at 6.9mm and 6.7mm respectively. And having spent some time with them here at CES, we can safely say that they’re a definite step in the right direction for the South Korean tech giant.

They feel solid, smooth and very well built, providing a premium look and feel that is on par with that of the iPhone 6 and HTC One (M8).

The A5 bumps things up to a 720p 5in screen and a 13MP camera, along with 2GB of RAM, and both devices sport a 5MP front-facing camera with selfies in mind.

While the specs are mid-range, it’s the design that’s piqued our interest. Could this be the year we’re treated to a premium all metal Galaxy S6 and Tab S range? We certainly hope so.

Stay tuned for official pricing annd release dates for the Galaxy A3 and A5.

READ MORE: All the big news from CES 2015, in one handy place 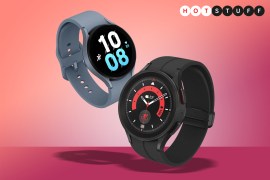