Any new soundbar needs to be rather special to survive – there are pallets of the things sitting in the storeroom of every back-street electronics shop. High-end French audio specialist Devialet has had one in development for over two years, so why does it think now is the time to launch Dione – and why did it take so long?

We went to Devialet’s Paris HQ to check out the Dione, a one-box TV audio powerhouse.

At £1990, Devialet’s bar is certainly priced for those looking for something more premium than most rivals, even if it undercuts Sennheiser’s superb Ambeo bar. And introducing a Dolby Atmos soundbar at this point in time isn’t so unusual: Bowers & Wilkins recently introduced the £900 Panorama 3 as its first Atmos offering – read our Panorama 3 review.

Devialet CEO Franck Lebouchard has overseen the launch of the Dione, and says it’s not before time, having originally slated the product for launch before last Christmas. “I prefer being ready in March but with an amazing product,” he smiles. “When I joined the company four years ago, we had Phantom. And it’s successful. But my first move was to say, ‘OK, we have those amazing technologies, we know how to do design, but we want to be in bigger markets.’ The biggest one is true wireless thanks to our friend Apple, and we entered that market with Gemini. And another booming market is TV soundbars.

“We decided to try and design a product that would be something truly new, using all our knowledge and our technologies. When we wrote the brief we realised that home cinema systems are painful in the sense that you have extra speakers. So we wanted everything all in one.”

Sphere is the key

“It’s a reduction in size from the Phantom,” says Emmanuel Nardin, Devialet’s design director, referring to the company’s mega-powerful one-box speaker range. “But we wanted to reuse this kind of concept [with the central sphere].”

Emmanuel then talks us through the fundamentals of why the new soundbar looks like it does. That sphere can be physically twisted on an axle depending on whether you have the bar on a TV stand or wall-mounted, so it’s always in the correct orientation.

“When you have such a big plate, it’s very difficult to make. It’s cheaper to make it in plastic but there are lots of reflections. We wanted to make this a high-end product, so we had to use high-grade materials. That’s why we decided to use sand-blasted aluminium to limit reflections from the TV above the soundbar.”

All thins must pass

Emmanuel doesn’t want to talk about compromise, but it’s clear there has to be some with this kind of design. After all, you’re dealing with a long, thin box that has to fit underneath a telly and a height dictated by the driver units inside – and with Atmos there are other restrictions in the form of the upward-firing drivers. And then there are other materials, such as the acoustic fabric, for which the options are not plentiful.

Franck muses: “When I told our designer we were going to do a soundbar he was pretty unhappy because the brief was ‘as thin as possible and black’ – what you’re looking at is the television, not the soundbar!”

The response was to create the distinctive sphere design inspired by Devialet’s other technologies, but also to introduce some more subtle touches. “It’s been very complicated,” says Franck. “We wanted to make the fact that it has two side speakers for Dolby Atmos very easy to understand,” adds Emmanuel. “So we cut it in sections.” The Dione has three clearly defined parts, with each up-firing Atmos unit also subtly sectioned off as part of the design.

“The 17 speakers, the aluminium plate… it’s super-nice but a total nightmare to produce. It was very important for us to have perfect sound horizontally or vertically. That’s been a headache but we’ve ended up with a product we absolutely love.”

We also ask Emmanuel about the inclusion of physical buttons: “The buttons are backup. When people want to turn up or turn off they can still do that if they can’t find their remote or their phone. In the past we made some products without an interface but customers didn’t like it.”

On the subject of future products, Franck says Devialet is readying to launch several new devices this year… but each one has again taken a long time to emerge: “The reason for that is, if we don’t do things different and higher-quality we are useless, basically. Plus people here would not be interested.” He adds that there had been other companies offering to make him a more generic soundbar than the Dione would have been.

Would he like to launch products in a shorter time? “I would love that, but it seems that we are unable to do so. For good reason: everyone in this building wants to do something disruptive.”

The Dione is a 12kg, 77mm-high, 1.2m-long dark grey soundbar that’s predictably high-end, with full Dolby Atmos support and 17 neodymium drivers inside the shell, including the two upward-firing units for Atmos. As you’d expect, as well as Bluetooth 5.0 and dual-band Wi-Fi there’s support for AirPlay 2, Spotify Connect and UPnP. While HDMI eARC is recommended, you can also hook it up via optical.

The sphere is the key design element of this soundbar, and is designed to hark back to the look of the company’s hefty Phantom speakers. It sits in a recess in the centre of a bespoke anodised aluminium plate. Because the soundbar can be wall-mounted or not depending on your preference, the ball twists around with a smooth action according to which way you want to use the soundbar. 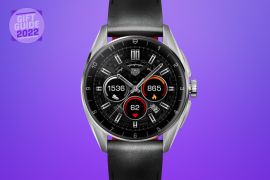 How to design the perfect home audio setup 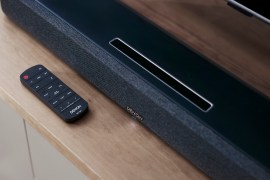 What is Dolby Atmos? The immersive audio tech explained

Dolby Atmos is, basically, 3D audio. But how does it work? 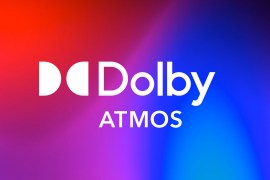