The £1,990, 12kg, 1.2m-long unit is predictably high-end, with full Dolby Atmos support and a total of 17 neodymium drivers in a 5.1.2 formation inside the soundbar, which has been in development for two and a half years and employs two new patents.

We’ve been lucky enough to hear the soundbar in action and it’s superb – with powerful bass and clear dialogue when required.

Dione enters a very crowded market, but entering the Dolby Atmos space at this point isn’t so unusual; Bowers and Wilkins’ £900 Panorama 3 recently launched as its first Atmos soundbar, too, which is a 13 speaker unit.

As you’d expect, there’s support for Apple’s AirPlay 2 in addition to Spotify Connect as well as Bluetooth 5.0 and UPnP. Dual-band 802.11ac Wi-Fi and Ethernet are also included and while it’s recommended to connect it up via HDMI eARC, you can hook it up via optical should you wish.

Dione will upscale any audio into 5.1.2, while the soundbar has a new processing tech that uses beamforming to feel more immersive. Volume levels are also automatically equalised so it’s easier to hear voices or similar.

The central sphere can adapt to the position of the soundbar and is designed to be reminiscent of Devialet’s Phantom speaker line. The sphere can also be twisted around depending on whether you wall mount the bar or not.

The soundbar has eight long-throw subwoofers in a SAM (Speaker Active Matching) push-push configuration designed to provide beefy bass at any volume – there’s no separate subwoofer.

Despite the packed internals, the bar measures is a mere 77mm high, though it’s long at 1.2m – working best with 55-inch TVs and above.

The soundbar doesn’t support smart assistants at present, but there is a plan to support Amazon Alexa in the future. 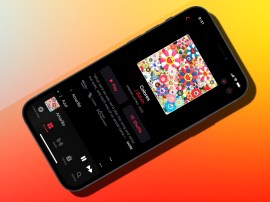 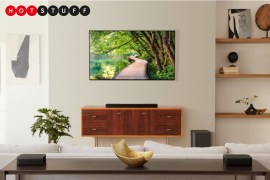