Samsung has officially unleashed the Odyssey Ark, its most extreme gaming monitor yet. The giant of a display envelops your peripheral vision with its 1000R curve, or can also tower over you thanks to a vertical orientation Cockpit mode.

First shown off at this year’s CES in concept form, the 55in monitor/TV hybrid promises a 4K resolution and rapid 165Hz adaptive refresh rate, with AMD FreeSync Premium Pro support. Samsung reckons it’s the first 55in 4K panel to reach those lofty heights, and it’s also one of the first curved screens of such magnitude to rock the firm’s quantum mini LED backlighting tech, which promises an OLED-rivalling static contrast ratio. It should also be capable of a retina-searing 1500 nits peak brightness, which will make HDR content look suitably mind-blowing.

The Ark shouldn’t disappoint on the sound front, either. It’s packing a speaker at each corner, along with two woofers in the middle for a 60W, 2.2.2 channel setup with low notes that should give some sound bars a run for their money.

It’s got Samsung’s Tizen smart TV interface, with access to streaming services and the firm’s Samsung Gaming Hub, which combines cloud gaming content from Xbox Game Pass, Nvidia GeForce Now, Google Stadia and Amazon Luna. The whole thing can be controlled using a bespoke, solar-powered Ark Dial controller: it aims to blend in with the other PC peripherals sat on your desk, with giant buttons, a rotating dial and a directional pad.

The magnificently minimal stand is height, tilt and pivot adjustable in landscape mode, and is tall enough to let you spin the screen 90 degrees for vertical use. Both orientations can be set up for different screen ratios and sizes, so you can shrink things down to 27in for competitive games, or swap to 32:9 for the most expansive view. It’ll also display up to four screens from its four HDMI 2.1 ports at once while horizontal, or three stacked screens in Cockpit mode.

The Odyssey Ark is available to order right now, with prices set to start at £2699 here in the UK. The first units should arrive with customers in early September.

Get your game on with these powerhouse laptops 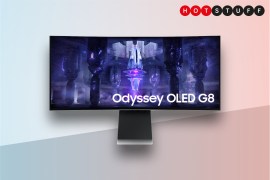 It’s a mouthful, but the Xeneon Flex 45WQHD240 is also mighty talented 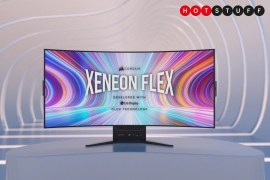