We’ve had the Boom, the Wonderboom and the Megaboom. Product name meetings at Ultimate Ears HQ must be becoming increasingly tricky, but a consensus was reached that its newest and most powerful speaker to date should be called the Hyperboom. Three times as loud and 10 times as bassy as the Megaboom 3, the fabric-wrapped cuboid speaker (which looks more like an Xbox Series X than any of UE’s previous joints) is definitely built for a big old party, and an IPX4 rating ensures it won’t fry if it accidentally takes a sip of your beer. Ultimate Ears says the Hyperboom can last for up to 24 hours between charges, and with two simultaneous Bluetooth connections, a 3.5mm aux and one optical audio source, you can play music from pretty much any device and hop between them with just a single button press. One-touch music controls return too, letting you quicky key up your favourite Apple Music, Spotify and Amazon Music playlists, while adaptive EQ will recognise when the speaker moves from indoors to out and optimises sound accordingly. You can even charge your phone on the big guy. It’s finally coming to the UK from today, and costs a fairly wallet-whacking £360. Big sound doesn’t come cheap. Review coming very soon.

Thank us for the music, for giving it to you 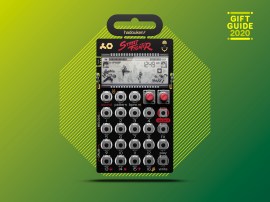