Home / Features / Best Amazon Echo 2022: which Alexa speaker is right for you?

Amazon’s Echo range has come a long way since the first Alexa-powered smart speaker launched back in 2014.

Fast forward to now and the AI voice assistant is everywhere – you’ll even find Alexa in a toilet if you look hard enough! Anyone looking to add some smarts to their home is bound to find a speaker that meets their needs, so follow our guide as we take you through the best Amazon Echo devices you can buy right now.

The Echo lineup currently features four main products: the Echo, Echo Dot, Echo Studio and Echo Show. Each one does something slightly different, and some come available in a couple of ways. This can be confusing, but we’re here to help you cut through the noise and find the Echo that’s right for you.

Whether you’re jumping on the Alexa bandwagon for the first time, looking to expand an existing Echo empire, or need a speaker to satisfy your inner audiophile, there’s a device designed for you – so let’s get started. Here’s a look at the current Amazon Echo range and who each device is best suited for.

The best Amazon Echo for most people

Amazon has updated its Echo Dot range with a few key tweaks that make it worthy of being the best Echo speaker for most people. The new Echo Dot with clock (and the slightly cheaper Echo Dot sans clock) promise twice the bass performance of their predecessors, making them more sonically robust. The clock version gets our pick due to the extra functionality offered by its improved higher-density LED display. Now, beyond merely showing you the time, it can also provide visual updates on the weather, as well as extra information such as the name of the current song that’s playing.

Naturally, you’ve got built-in Alexa smarts at your disposal, along with the usual volume and Mic Off buttons for added peace of mind. If you’ve currently got a fourth-generation Echo Dot then there’s not enough of an upgrade here to absolutely warrant a purchase, but if you’re in the market for a second device anyway (or, indeed, if this is your first foray into the Echo world), then the latest generation Dot makes the most sense for most people.

The original Echo hasn’t had the luxury of a new version, so unlike the Dot above, it’s stuck in its fourth-generation iteration. That’s not to say it’s worse, however. Far cheaper than its £150 launch price, it’s definitely the better choice for music lovers, thanks to a 3.0-inch woofer and dual 0.8-inch tweeters for a fuller, room-filling sound that gets the Dolby seal of approval. This extra audio hardware also means it remains larger than the Dot models too.

Its seven-mic array is far from shabby, and with noise-cancelling tech included, it can still hear your commands over almost any cacophony the kids are making or the music that it’s playing. It’s a great device for smart home management as well, featuring a built-in Zigbee hub that allows you to more easily control connected heating and lighting systems using Alexa.

It might lack a clock like its Dot sibling, but with better speakers and a dedicated sub, this is the best-sounding bang-for-buck spherical Echo device around. The Echo Studio (more on that down below) has even better audio chops, but will set you back more than double the price, making this a smart middle-ground choice.

The best Amazon Echo on a budget

The heavily discounted fourth-generation Echo Dot is a veritable bargain if you’re looking for Alexa functionality without draining your wallet. It looks pretty much the same as the newer, more expensive 5th generation Echo Dot, which means there’s enough room inside for a 1.6-inch speaker – decent enough to meet most people’s Spotify needs. If it’s not, there’s Bluetooth connectivity and a 3.5mm cable output, so you can connect it to a separate wired or wireless speaker to give some added oomph to your tunes.

Its fabric coat comes across equally as sophisticated, and the fourth-generation Dot is just as capable of answering queries and assisting you as the fuller-bodied models are. As with the newer version, paying a bit extra will nab you a built-in clock, though unlike the new model, it won’t offer anything else beyond the time.

The best Amazon Echo for kids

The newer fifth-generation of the Echo Dot Kids model now comes in two new flavours —a delightfully adorable owl, or a dragon. Identical to its adult-orientated cousin, it features the same bass upgrade for improved sound quality. Note, however, that there’s no clock version available.

Instead, your cash will net you kid-friendly custom greetings and jokes, along with the addition of those all-important parent controls. There’s also a generous worry-free two-year guarantee that should cover practically any mishap without fuss, and a year of Amazon Kids+ thrown in for good measure.

The best Amazon Echo for families

Ever wished Alexa could show you stuff, as well as tell you about it? Then you might be tempted by one of the four Echo Show models currently available.

The Echo Show combines Alexa smarts with either a 5-inch, 8-inch, 10-inch or 15-inch display, depending on which model you opt for. Understanding the range is relatively straightforward, as the screen size corresponds to the device’s model number, so the Echo Show 5 features a 5-inch display, and so on.

The main thing the Echo Show’s screen adds is the ability to make video calls, which is why we think it’s the perfect family device. For most people, the Echo Show 8 or Echo Show 10 should hit the sweet spot in that regard.

The Echo Show 5 is more of a super-smart clock, ideal for bedside tables and the like, while the larger Show 15 is ideal for family organisation as it’s big enough to be wall-mounted. This means it can also be a second TV replacement of sorts, as you can stream Netflix and Prime Video on it, provided you’re not too fussed about it maxing out at an HD picture. From November, users can also enjoy the full Fire TV experience on all existing and newly purchased Echo Show 15 devices, at no additional cost.

You still primarily interact with all Show devices using your voice, but examples of the kinds of information displayed relevant to your requests include detailed weather reports, for example, or step-by-step recipe instructions when you’re cooking. Another major benefit of adding a video display to your Echo is that it can link up with smart home security products like Ring doorbells – a serious upgrade over the door viewers (aka peep holes) of old.

Starting with the Echo Show 8 and above, you’ll get at least a pair of speakers round the back, with Show 10 and Show 15 being superior to the regular Echo in terms of audio quality. And not that ‘audio quality and ‘intercom’ necessarily go hand-in-hand, but larger Echo Shows double as one of those if you want, too.

This is the best Echo to get if you make regular video calls, and like the sound of all the benefits of having a visual display mentioned above – if you’re still not sure, though, we have an Echo Show guide that explains the differences between the four in even more detail.

Why? While most Echo speakers are serviceable enough for some tunes to do the washing up to, the Echo Studio is a proper bit of hi-fi kit, offering a five-speaker array comprising a 1-inch tweeter, three 2-inch mid-range speakers, and a 5.25-inch woofer for true 3D sound.

As such, you can expect powerful bass, dynamic midrange and crisp highs, with the Studio also getting the Dolby Atmos seal of approval, meaning there’s especially good clarity and depth to the sound it produces.

On top of that, it’ll handle all the same Alexa requests as other Echo models and has the benefit of the Zigbee hub again for controlling all your smart home devices, if you have or are looking to build a bit of an ecosystem.

Priced noticeably higher than the regular Echo, it’s the clear choice for audiophiles and anyone else wanting to really blast the tunes. As a result, this is the Echo many of us would buy ourselves if push came to shove — especially as it’s now available in an all-new Glacier White colour. Not only that, but thanks to a software update, new and existing Echo Studio owners can enjoy new custom-built spatial audio processing tech, for an enhanced immersive stereo sound experience for even better music and film nights.

Alexa, what happens when a business model relies on vague assumptions about somehow making money later? 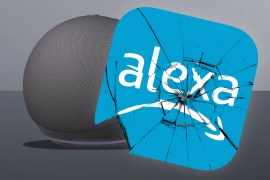