Regardless of whether you’ve been meaning to swap your very mature iPhone 5s for years, or you’re bored with your iPhone 6 and still want to save some pennies – we’re here to help.

But we know the genuie reason you’ve landed on this page is so that you can buy the older mobile, and we can’t blame you.

Fair enough: below you’ll find the top deals on offer with all of the major networks.

These all show the total cost of ownership (TCO), which is the cost of the contract, multiplied by the 24 months duration, with the upfront cost added.

Apple’s biggest phone plus 32GB of storage might seem an odd combination, but cloud storage could make it work. We like the EE deal for its low monthly cost, and Three for the big data.

The iPhone SE is Apple’s 4in iPhone, crammed with the powerful innards of the iPhone 6s. We’ve spotted a few cracking deals on it, led by these four below.

The numerical network’s leading deal comes with 2GB for £22 a month, with no upfront fee.

O2’s most outstanding deal for the iPhone SE delivers 1GB of data, on a £24 contract, with no upfront cost.

Is 32GB of phone enough for you? If it is, these are the iPhone 6s deals you’ll want to take a look at. The Three deal looks the pick of the bunch to us with its low monthly cost and big data.

Three’s best 32GB iPhone deal will set you back £26 a month and for that you get 2GB of data. 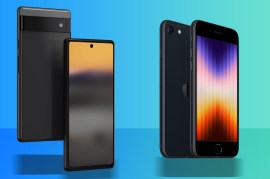