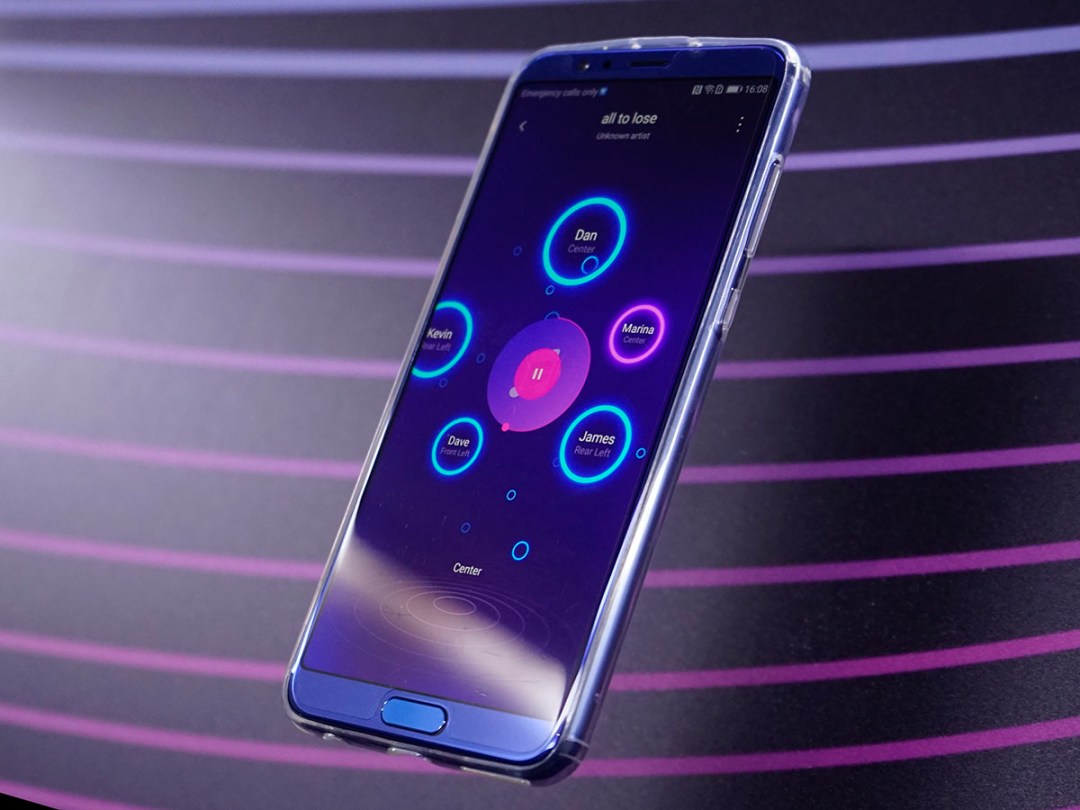 Think of some great rivalries. Rangers vs Celtic. DC vs Marvel comes to mind. Even Kevin from Home Alone had those two wacky robbers.

It’s probably about time you added Honor and OnePlus to that list. Here are two companies that just can’t seem to stop butting heads over who has the best flagship-besting smartphone. It happened with the OnePlus 5 and Honor 9 last summer, and it’s happening again now.

The View10 is a top-spec handset that wouldn’t look out of place alongside big-name rivals like Samsung’s Galaxy S8, thanks to a frame-filling 18:9 aspect screen and skinny bezels – only here, you don’t need to contemplate selling a kidney to afford one.

Think of it as a Mate 10 or Mate 10 Pro, only made of metal instead of glass. And a heck of a lot less expensive. It’s even packing the same AI-boosted dual camera cleverness we saw in Huawei’s most recent flagships. And with a OnePlus 5T-matching price, it’s never been harder to pick a winner.

The View 10 is massive – but it doesn’t feel overly unwieldy in your hands thanks to those skinny screen bezels. There’s still room at the bottom of the phone for a fingerprint sensor, but seeing how the rest of Honor’s line-up shifts the sensor to the back, it’s a bit odd having it up front here.

With glass seemingly reserved for Huawei’s more expensive Mate series , the View 10’s metal body sits squarely up against the OnePlus 5T. Which one you think looks better will fall down to how much you like the colour blue, whether a front-facing finger scanner is a big deal, and whether you like the OnePlus mute slider or not.

It’s a tough call, especially with both phones costing exactly the same cash, but the Honor does feel undeniably heftier in your hand. The 5T has curvier edges that more comfortably sit in your palm, and is ever-so-slightly smaller overall.

It was never going to be as eye-catching as the all-glass Honor 9, but the metal build will at least survive a few knocks and bumps – especially with each corner cushioned to resist impacts. We’d still feel happier slapping a case on one before sliding it into a pocket, though.

The twin camera lenses around back are practically an Honor trademark now, with nothing else to distract you from the monolithic metal design, but not everyone is going to like the way they poke out of the chassis.

It’s harder to complain about the headphone jack, seeing as you actually get one. There’ll be no dongle dalliances here.

Keeping the fingerprint sensor up front means there’s ‘only’ room for a 5.99in display, whereas the OnePlus 5T (with its sensor on the back) finds space for a 6.01in panel. Not that you’d spot the difference without whipping out a ruler.

There are more than enough pixels here to make your photos look great, if not quite on par with more expensive QHD flagships. You get a 2160×1080 resolution screen, so basically Full HD plus a few extra pixels to fill up the 18:9 aspect ratio. It’s the in thing right now, and any phone that launches with old-school 16:9 is going to feel almost instantly out of date.

Look at the spec sheet and you’ll see size isn’t the only difference: OnePlus has opted for AMOLED, but Honor has stuck with an LCD panel. As a result, the View 10 can’t quite match the 5T’s excellent contrast and deep, inky blacks, with dark video scenes lacking a bit of depth.

However, the View 10 does have impressively white whites, and ample brightness. Crank this up and you’ll have no trouble seeing what’s onscreen while you’re outdoors.

Colours look vibrant enough, and there’s plenty of detail in still images. Viewing angles are absolutely on point, too. You’ll have to spend a healthy chunk of change more to get a significantly better panel.

The speaker is loud enough, but there’s only one of them – the earpiece microphone doesn’t double as a second driver. That makes it all too easy to muffle your audio if you’re not careful how you hold the phone.

You can even pair up in sync with other View 10s, using NFC to turn a handful of handsets into a distributed speaker network. Handy if you’re ever in the same room as a load of other Honor phone owners. And you all want to listen to the same song. Sure, it’s a novelty, but you never know, right?

CAMERA: AI OF THE TIGER

You won’t find any Leica logos like you might on Huawei’s Mate 10 Pro, and expensive extras like optical image stabilisation have been ditched to keep the price low – but that doesn’t stop the View 10 from being a potent snapper.

It has the same 16MP+20MP dual camera setup you’ll find on Huawei’s latest phones, with the main sensor shooting in full colour and the secondary one sticking to monochrome to boost details and help out at night.

Feed it enough light and the View 10 can take some excellent shots, with ample detail and great exposure balance. Things can look a little washed out in places, and it does tend to over-expose skies unless you tweak things manually, but the results are a step above the OnePlus 5T. There’s still no auto HDR mode, though, leaving you to force it on in the settings.

Phase-detect autofocus is fairly quick to acquire targets, and the f/1.8 aperture is wide enough to get lots of light onto the sensor whenever you tap the shutter button. At night, things get noticeably grainier, with details dropping off and the LED flash only going to far to help, but it still has the edge over similarly priced phones.

The dual sensor setup gives you lossless 2x zoom, as well as depth-sensing for portrait shots with dreamy bokeh blur – but you’ve seen all that before. The big new addition is AI scene recognition, which works in exactly the same way as it does on the Mate 10 and Mate 10 Pro.

Stick the camera in Auto mode, point it at one of the supported scenes and it’ll automatically tweak the settings to suit whatever you’re snapping. Cats and dogs are high up the list, along with group selfies and theatres – although anyone taking photos in a theatre deserves a plague o’ both their houses. Assuming they can afford two houses, of course.

It’s tough to tell if this recognition genuinely improves your photos, but the detection is quick – and the tech has plenty of other uses.

The neural processing unit, a dedicated bit of silicon that works with the View 10’s AI brain, spends most of its time keeping an eye on which apps you’re using, closing ones you aren’t and prioritising features so they’re always quick.

It’s the kind of tech that takes time to learn how you use your phone, and we haven’t had a handset long enough for it to get a proper idea of how we work, so it’s tough to say if this makes a difference – right now, we’d take Honor’s claim with a pinch of salt.

The one thing we can’t argue with is the pre-loaded Translator app, which was developed by Microsoft to specifically use the NPU for speedy translations of foreign language text. Point the camera at a menu and it’ll automatically translate the words onscreen – it worked perfectly on a German restaurant menu, and managed it in one of South London’s numerous oriental supermarkets too.

Beyond AI, the View 10 runs Android Oreo, with icons and a UI that’s almost identical to the Mate 10. Honor uses the same EMUI 8 skin as Huawei, which while not as overbearing as it used to be, still shifts a few things around like the notification tray, Settings screen and app icons.

It’s different enough to vanilla Android that it might confuse anyone coming from a Pixel or OnePlus handset, but after a few hours you’ll work out the minor visual differences.

You’ll spend longer working out which of the numerous pre-installed apps you’ll actually want to use, but at least you won’t run out of space for your own: the View 10 has 128GB of on-board storage. There’s even a microSD card slot in case you need more space later, although that’ll mean giving up the second SIM card slot.

One final hidden extra is facial recognition – sort of. There’s no fancy feature-mapping like FaceID on an iPhone X, or even face unlock like the OnePlus 5T, but the phone can display more detailed notifications when it picks up your face. You’ve still got to tap in your passcode or hold a finger on the scanner to actually get past the lockscreen, though.

All those AI smarts come courtesy of parent company Huawei’s Kirin 970 CPU. Even without the dedicated NPU, the chip is ridiculously quick, making Android 8 Oreo feel super smooth – especially when paired with 6GB of RAM, which really helps out when you’re running two apps side-by-side.

Games like Modern Combat VS, which have been optimised for the 18:9 aspect screen, barely drop a frame, and there was no stutter or lag on show in any of the games we tried.

The resolution helps here, because the chip isn’t working overtime to push more pixels than you can see. Regular apps feel silky smooth, too.

Battery life is simply average, rather than anything outstanding. The 3750mAh cell might be bigger than most, but it’s only good for a full day of use between charges.

It’s a shame you don’t get the same 4000mAh battery as the more expensive Mate 10 Pro here, but fast-charging over USB-C should mean you aren’t waiting around forever to top up – even if the OnePlus 5T is faster with its proprietary Dash Charge.

Just like every other Honor phone, there’s no denying the View 10’s sheer value. It takes all the best bits of parent company Huawei’s Mate 10 Pro and packages them together for significantly less cash.

A smaller battery and a slightly simpler camera seem like small sacrifices to make when everything else stacks up so well.

OK, it can’t quite match the bargain basement price of the Honor 9, and sadly loses out on the gorgeous glass finish, but makes up for it with the in-demand 18:9 screen and thin bezels that we all want from our phones right now.

The only problem? The OnePlus 5T. The Honor has a better camera and expandable storage, but the 5T has a slicker version of Android, better battery, and AMOLED screen. Oh, and face unlock that actually, y’know, unlocks your phone.

Which one is best for you depends on what you’ll be using your phone for: die-hard Android fans will prefer a stock experience with OnePlus, but photographers are better off with the View 10.

A fantastic phone at a fantastic price, if not quite the outright bargain of its smaller brother

EMUI isn’t for everyone