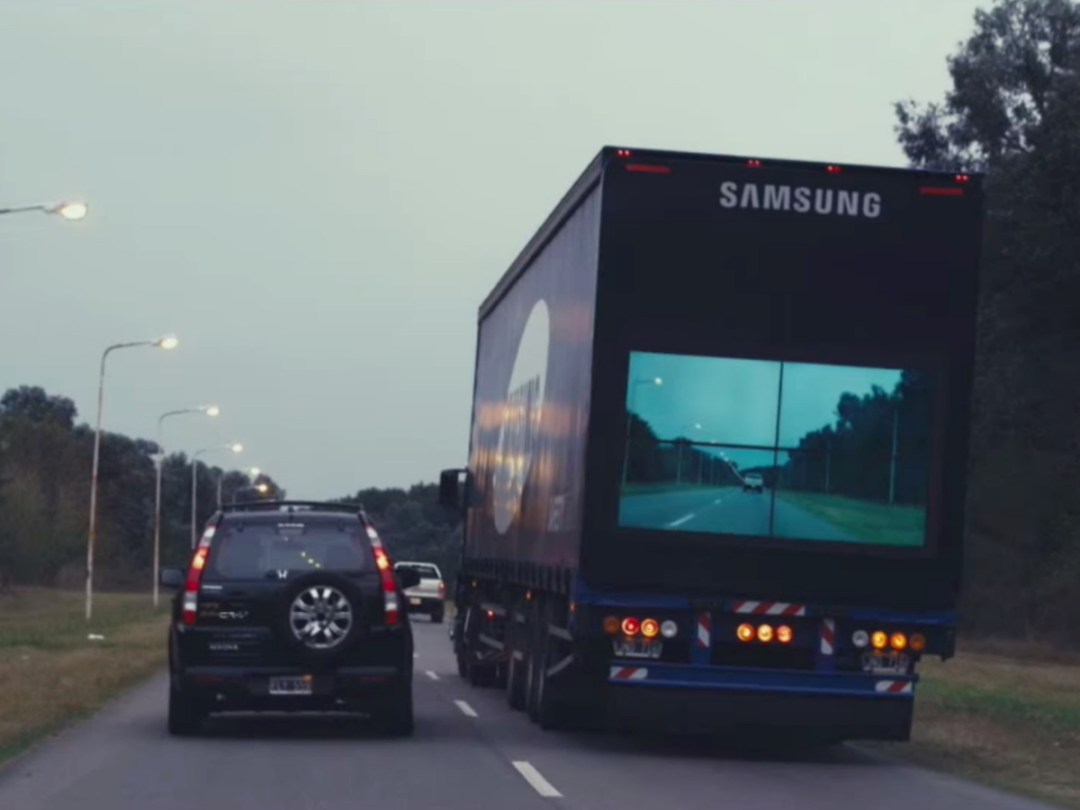 Samsung has an array of commercial interests, but the company’s reach is vast and varied, and we occasionally hear about intriguing philanthropic experiments designed to help people or overcome problems via ingenuity and technology alike.

One such project is Samsung’s new Safety Truck, which allows cars behind the towering lorry to easily see what’s happening in front of it. It’s the real-life manifestation of the Transparentius concept shared by Art Lebedev in 2009 (although not officially, it seems), as The Verge points out, only it’s not a pipe dream anymore.

The premise is pretty straightforward: Samsung’s trucks have a small wireless camera nestled on the front, and then four large displays are joined together on the back doors to show a singular image. The camera captures what’s in front of the lorry and immediately shows it on the back, creating the illusion of a see-through truck.

It might be an odd thing to encounter on the road, but there are practical benefits. As the video above proposes, these trucks can help avoid collisions on two-lane roads during passing attempts, plus it could alert you to a problem (like a stopped car) ahead so you’re not just waiting for the lorry driver to react. Samsung tested the concept in Argentina, which has a high rate of traffic accidents.

On the other hand, it could be distracting – if you’re staring at the TVs, will you be looking at the truck’s brake lights or the other drivers around you? We imagine there could be regulatory hurdles to bringing this project to certain countries, plus it’s an expensive investment that other companies might not be willing to make.

Samsung says it’s working with the Argentinian government and other organizations to obtain legal approval to send the trucks out on the road. If that happens, maybe we’ll see these screen-toting lorries elsewhere before long.

[Source: Samsung Tomorrow via The Verge]