Phone fans eager for one of the greats to make a comeback were given a glimmer of hope this week: HTC has apparently set a date for its upcoming Viverse smartphone. The firm shared an invite on its HTC Taiwan Facebook page with a phone-shaped teaser image, circling the 28th of June as the big day.

HTC hasn’t really made a smartphone worth getting excited over for years, ever since it sold a hefty portion of its business to Google – who put the engineering team to work on multiple generations of superb Pixel phones. It has instead doubled down on VR and the metaverse, having launched its own open-source Viverse at the beginning of the year. The blend of virtual and augmented reality lets you attend business meetings, collaborate and chat with others, and tune in to VR concert streams.

The firm confirmed it was working on a new handset with some kind of metaverse support at the Mobile World Congress show earlier this year. HTC said the phone would be a high-end model, but revealed little else about it at the time. It was originally expected to arrive in April, but supply chain constraints reportedly meant it was bumped back to the summer.

Little else is known about the phone, other than that it’ll probably integrate with HTC’s Vive Flow VR headset. It will almost certainly have some metaverse-focused augmented reality abilities, which would help set it apart from the rest of the phone world. After all, unique features (or gimmicks, depending on who you ask) are something of an HTC speciality.

In the past it experimented with touch-sensitive buttons and squeezable gestures, and most recently had the Exodus 1 blockchain phone, which could securely store crypto keys.

Rumours reported by Focus Taiwan suggest HTC has teamed up with Taiwanese networks FarEasTone, Chunghwa Telecom and Taiwan Mobile to sell the phone in its home country. There’s no word yet if it’ll be going further afield just yet. 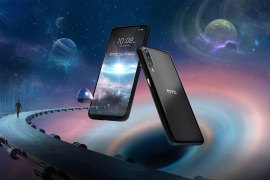