Home / News / Hey Siri, show me 7 things I’d prefer you do, rather than dropping ‘Hey’

Some weeks, there’s speculation Apple will change the world. This week, we heard Apple plans to drop the ‘Hey’ from ‘Hey Siri’. Hardly thrilling news. Yet it’s also reportedly a massive tech challenge that will require lots of engineer brains and cutting-edge AI training. And it could take two years.

The result would be Apple matching Amazon’s Alexa in you needing only a single word to trigger its AI assistant – but you’d use one fewer syllable. That would beat Google by the same amount too. Take that, world! Imagine the fractions of seconds you’d save every single day! Or – and hear me out on this – who cares?

Instead, I’d prefer Apple pool its efforts into making Siri be better and do more. Here are some ideas about how.

Let people own the trigger phrase

I’m not overly excited about a switch from ‘Hey Siri’ to ‘Siri’, for reasons that will become clear. But if we’re going down the route of change, give people the option to use a custom phrase. ‘Oi Apple’, say. Or, to make Trekkies who use Apple kit happy, ‘Computer’.

If I say out loud that there’s ‘a serious problem’ about anything and an Apple device is nearby, Siri will activate, due to mishearing what I said. To be fair, it doesn’t wake up erroneously as much as my Echo. But the Echo’s lonely these days as the last surviving bit of Amazon kit in the house and just wants to be noticed. Poor thing.

When I intentionally activate Siri, it wakes up on every nearby Apple device. And then it helpfully sticks around on a random one, rather than what I’m using. If I’m smashing away at my iMac keyboard, maybe… default to the Mac? Or let me say ‘Hey Siri, on the Mac’ without my iPhone then responding: ‘Here is the map’.

Be better with accents

I’m from the south of England, and legally required to speak in a humdrum monotone. Even so, you’d think Siri might respond to ‘Play Wire’s latest album’ in a manner other than firing up White by Charlotte Hatherley on Apple Music. Perhaps Siri’s a fan. (Her ‘Kim Wilde’ song is a classic.) It’d be nice to not have to talk LOUDLY AND SLOWLY, like an obnoxious British tourist, to have Siri understand me.

Similarly, understanding colloquial language would be good. ‘When’s the next train from Basingstoke to Waterloo’ is met with Siri ‘getting public transport directions from Basingstoke to Albury, Guildford’. When I add ‘London’ before ‘Waterloo’, Siri directs me to London. Just London. Specifically, for some reason, a random spot on Tooley Street, which is at least near a nice park. So that’s something.

I want to book a table or cinema ticket. Tough. Siri serves up web pages. ‘Hey Siri, update my apps’ merely opens the App Store. Asking about the best price for something lists places it’s for sale, not the cheapest. I can create a note but not add to it. Siri is like an office assistant that points to a limited contract with a handful of bullet points when you ask for something.

Yeah, that’s the problem, unless I spend ages faffing about in Shortcuts piecing together the functionality myself. Still, at least that pesky introductory syllable will within two years be gone from the trigger phrase, eh?

I’m in thrall to my iPhone – and for once, that’s a good thing

My iPhone telling me what to do all the time has made me a happier person. Probably 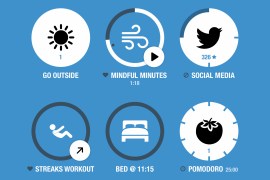