Die-hard Windows Phone fans are often seen in forums and comments secetions doggedly demanding that Microsoft release new phones (especially flagships). Instead, the company is gussying up a couple of current favorites.

The high-end Lumia 930 – which we called the best Windows Phone yet back in August – and the mid-range Lumia 830 are both being redone with an anodized golden finish, with the tweaked handsets due out in the coming weeks.

Unlike, say, Apple’s gold-backed iPhones, these visual enhancements are subtler: the gold colour is only found on the border surrounding the phone, with black found on the front bezel and a choice of either black or white backing. Both models also nicely put the Nokia logo in gold.

Indeed, the Nokia logo remains intact. Both phones originally launched back when Microsoft still used the Nokia brand for such things, but that’s no longer the case – brand new Lumia phone simply bear the Microsoft logo. This may be the last time the Nokia logo appears on a previously unseen Lumia smartphone. (Shame the above renders that Microsoft posted look so haggard.)

Aside from the visual flourish, nothing else appears to be changed about either device, and it’s currently unclear whether you’ll have to pay a premium over the standard prices for each model.

The Lumia 930 Gold will hit “select countries in Europe” this week in black, and later this month in white. Meanwhile, the Lumia 830 Gold will follow in February in both colour options.

Everything you need to know about the Lumia 950 and 950XL 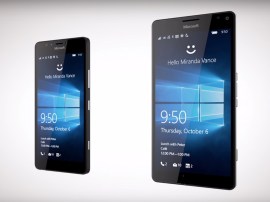 The Windows 10 phone preview is now available, but only for a few Lumias

If you have the right phone, you can try Microsoft’s next OS months before its release 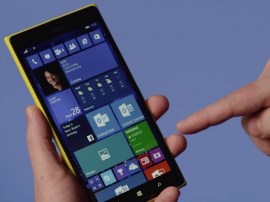