We’d have loved to have been a fly on the wall of the Fender boardroom when discussing projects to mark the guitar god’s 75th anniversary, because they’ve hit upon releasing a limited edition Final Fantasy XIV Stratocaster. The black Stratocaster design has been accented with blue and purple crystals that represent the “crystal of darkness and light”, a key item in FFXIV. Developed in collaboration by Fender and the Square Enix team, the axe will also be available in-game from 25 May when the new FFXIV Patch 5.55 lands – nice touch. To own the real thing you’ll have to pre-order from 25 May with deliveries expected later this year. You’ll also have to max out the credit card or have a very generous nan happy to stump up £3,200. The physical features, playability, and sound of the exquisite Stratocaster guitar are said to “mirror the world of Final Fantasy XIV”. The guitar features a maple neck with a slim “Modern C” shape that fits comfortably in the hand. A 9.5in radius rosewood fingerboard with narrow tall frets affords precise fretting and choke-free bends. Crystalline, warm and touch-sensitive tones are made possible via a trio of V-Mod single-coil Strat pickups while a “limit break” (a special ability used in FFXIV) switch takes the form of a push-push tone pot that puts the bridge and middle pickups in series for beefier sounds. Naturally everything is branded to the hilt and comes in a vintage hardshell case and a special book containing a numbered certificate and an exclusive FFXIV illustration card made by Square Enix. If you’re happy enough with the in-game virtual offering instead, the “Aetherolectric guitar” will also be available at the playground “Gold Saucer,” allowing fans to enjoy the sophisticated look of the Final Fantasy XIV Stratocaster guitar as a home furnishing. Furthermore, the guitar is equipped with an in-game job called “Bard,” which allows players to use special skills. 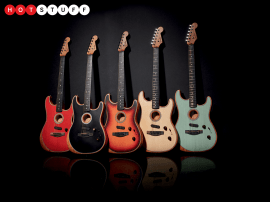