The original Amazon Echo Show felt like a proof of concept – an expensive, clunky, and not-quite-essential one, unfortunately. And the potentially good idea there, of a spoken visual assistant with a screen attached, has since been bettered by Google Assistant-powered devices. But maybe Amazon has it right the second time with the new Echo Show. At a glance, it’s been dramatically enhanced. The 10in display is about twice as large and dominates the front, cutting the heaps of bezel from before, while the curvier design and fabric backing suggest a device better suited to blend amongst your home décor. It’ll even sound better than before, says Amazon. It’s still ideal for viewing recipes in the kitchen or placing video calls, plus the Echo Show can be the brains of your smart home thanks to Zigbee hub functionality. It’s still the priciest Echo at £219.99, but this Echo Show seems massively improved. It’s out on 11 October.

Why not freak your nut out with one of these scary movies? Updated for April 2022 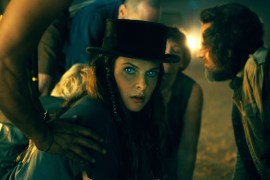