Some say you can feel the earth’s vibrations by hugging trees. Not keen on clutching trunks? For natural melodies with old-school roots, try the latest reference headphones from Grado. Equipped with the audio aficionado’s fourth-gen X Driver, the RS1x cans come wrapped in a trio of wood species.

An update to the open-back RS1 which previously shipped with a Mahogany shell, the RS1x now features a maple sleeve, hemp core and cocobolo outer ring. As any woodworker worth their plane will know, combining three types of timber is no mean feat. Doing it in a way which produces a lovely sound signature with zero sonic splinters? That’s the stuff of master craftsmanship.

More than a mere veneer, the ligneous finish is designed to maximise the tonal quality of the 50mm drivers inside. Grado’s long worked with wood, but this is the first time its X Drivers have been housed in the tree material. Grado reckons the combo extracts ‘warm and embracing tonal abilities’ from the sizeable driver inside (only the company’s fourth speaker element in its 30-year history). Which is good, given the £800 ($750) price tag.

Prefer your timber in twos? The marginally more affordable RS2x (£600 / $550) uses the team of maple and hemp to bring out the best from its smaller (but still substantial) 44mm dynamic driver.

Both drivers have been tuned to suit their specific housings. They also benefit from increased magnetic power, lighter voice coils and reconfigured diaphragms. The result of all that careful tinkering? Hook up to an audio source via the 8-conductor cable and you should hear rich melodies and Grado’s renowned mid-range. Which beats putting your ear to a tree. 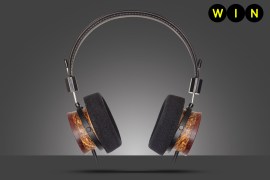