Grado is known primarily for its wired, open-back, over-ear headphones. You know, the kind favoured by Proper Audiophiles who wouldn’t be seen within a mile of an AirPod. But it seems that no audio brand can resist the urge to throw a pair of true wireless earbuds into an increasingly crowded market, and so we have the GT220. Grado’s first wireless buds are about as mainstream-looking as their rivals, but as you’d expect, the Brooklyn-based company is talking a big game where sound quality is concerned. Each bud houses an 8mm driver specifically tuned for its polycarbonate housing, together delivering, we’re told, the ‘world-famous sonic signature that we’ve come to expect from Grado’. The GT220 comes with a choice of silicon eartips and each bud weighs just 5g, so they should be comfortable to wear. You can expect six hours of battery on a single charge, with an extra 30 from the charging case, as well as modern features like USB-charging, Bluetooth 5.0, voice assistant (Siri and Google Assistant) support, and touch controls. At £249.95, you’ll have to decide if Grado’s renowned audio chops make the GT220 worth going for over the many noise-cancelling-boasting alternatives.

Nab yourself a super pair of earphones – we’ve got four pairs to give away! 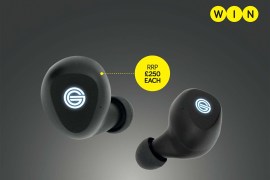