Home / Features / Apple Face ID: what is it and how does it work?

With just a glimpse of your ugly mug Apple’s Face ID tech can tell whether the phone is being held by its rightful owner.

But how does it do it? And is it secure enough to stop your friends unlocking your phone and filling your camera roll with ridiculous selfies?

How does Face ID work?

If you’ve an iPhone with a ‘notch’ at the top of the screen, you can use Face ID. The notch is basically where the cut-out bit for the front-facing camera is. But here you’ll also find a infrared camera, a dot projector, a proximity sensor, a flood illuminator and an ambient light sensor.

They’re not there to take sci-fi selfies, they combine to scan your face every time you want to access your phone. Apple calls it a TrueDepth camera system.

Every time you pick up your phone the flood illuminator (we’d never heard of one either) detects that a face has been presented to it, which then triggers the IR camera and the dot projector. The former takes an infrared photo, while the dot projector maps 30,000 points on your face – a bit like motion capturing an actor for an animated movie or game.

The phone then compares those images to the map it holds of your face. If it’s a match, you’re in.

How do you set it up?

You set up Face ID when you unbox your new iPhone but it’s a very simple process. You just point the camera at your face and let it get a good look at you from all angles. That’s it.

You can even change your appearance and it’ll still recognise you, so even putting on a hat and glasses and growing a beard won’t fool it.

How secure is it?

According to Apple, Touch ID had a 1 in 50,000 chance of accepting the wrong fingerprint, whereas with Face ID it’s 1 in 1,000,000. That is unless you have an identical twin, in which case you might want to stick to using a passcode, especially if they’re evil.

Face ID can be used to authorise Apple Pay transactions or access apps that used to require a fingerprint. That means the banks are obviously convinced by it and those guys keep their money in massive vaults, so you can be fairly sure they take security seriously.

As with Touch ID, the scan of your face that it compares others to is stored on the phone itself, so Apple never has access to it. That’s important in the event of any hackers breaking into the systems at HQ in Cupertino.

Is it just for security?

No, the iPhone also uses the TrueDepth camera to copy your facial expressions and paste them onto its moving animojis, which you can then send via iMessage. Because there’s never been a panda emoji that quite captures that feeling that you’ve wasted hours of your life looking for the right emoji. 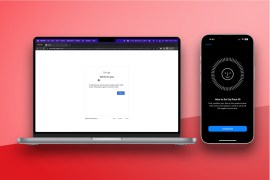