It’s been a little over a decade since the first Xenoblade Chronicles was released on the Wii, and it’s incredible to think back that it could’ve all ended there.

Back then, Nintendo didn’t even plan to bring the Japanese role-playing game to the West, until a dedicated fan campaign forced the company’s hand, though even then the acclaimed title remained a cult niche. How things have changed since, with series characters appearing in Super Smash Bros. and multiple sequels, as well as a handsome Switch remaster of the first game released in 2020.

But if you’ve still yet to be enticed by this RPG’s epic sense of scale (developer MonolithSoft also having a hand in working on the game-changing open world in Breath of the Wild) and anime-influenced charms, then Xenoblade Chronicles 3 is a good place to start.

Despite the number, no, you don’t have to have played the previous games in order to get into this one, though there are certainly some elements that fans will feel familiar with, and others that will equally surprise. What you will need though is the time commitment to get through a story that’s the series’ most mature and ambitious yet.

Compared to previous instalments, Xenoblade Chronicles 3 arguably has the bleakest premise, set in a world where two nations, Keves and Agnus, are in an endless cycle of war. It’s a war that’s also fought entirely by artificially engineered soldiers designed to live for only 10 years (unless they kick the bucket on the battlefield first) who spend that entire time only fighting, since killing their enemy is necessary so their life force can be absorbed to keep a flame clock burning that keeps them alive. No laughs for these child soldiers then.

Those themes weigh even heavier on certain characters conscious that they have just a few months left on their ten-year existence (referred to as terms) or those who have the job of playing a mournful tune to send off the souls of the fallen. If the previous game had been guilty of succumbing to excessive anime tropes such as its wildly under-dressed and over-proportioned female characters, then this pivots to the other extreme of giving you a serious case of the sads.

But beneath this dystopian cross between The Matrix and Hunger Games (which also has its own shadowy group of masked individuals looking over everything like some twisted sport) is also hope, as our heroes are made up of soldiers from both Keves and Agnus, brought together by a chance encounter within the game’s opening hours, who set out on a journey to discover the reason behind this war and break the endless cycle for good. To say more would be to spoil things, but rest assured that there are big twists, while the game doesn’t shy away from big themes delivered in big set pieces with big emotions.

If it wasn’t already obvious, scale is a hallmark of a Xenoblade game, from the story’s length let alone the many optional side quests involving scores of characters, whose relationships are mapped out on a complex affinity chart, to its beautifully vast environments. Even if the biomes you visit aren’t actually open world in design they nonetheless have the illusion of stretching out beyond your wildest imagination. Notably there’s a city you’re trying to reach. And it’s located at a massive towering sword that a planet-sized giant could only wield.

Adding to that is your core party of six characters, considerably more than a typical party-based RPG of three or four, though as long as they’re all equipped with the relevant skills, you can safely focus on one character and leave the AI to handle the rest (you can even toggle to auto-battle for everything bar boss fights). There’s also space for a seventh party member, though this is reserved for hero guest characters that you never control, but whose skills can be passed onto fellow party members.

Although this is a single-player game, combat has the feel of an MMORPG, from how each class has a vital role as damage-dealing attackers, aggro-baiting defenders or life-saving supports, to the various command-based skills with their own cooldowns. There are a lot of systems to parse at first but the game does a decent job of explaining everything with tutorials, not only helpful for newcomers but also for old-time fans who may not have picked up the last game for a few years. There’s also a new feature where pairs of characters merge to become Ouroboros, a powerful bio-mechanical Evangelion-type form, albeit for a limited time so that you don’t abuse it as an easy power-up.

Once you get to grips with the battle system’s quirks, it can make for some epic fights, especially as chain combos can accumulate ridiculous damage numbers. It’s only a shame that your achievements are regularly undercut by the delivery of the story. It does begin to grate when you’ve spent ages on a tough boss only for it to follow with a cut scene showing your heroes apparently lose the fight or for the bad guys to have some deus ex machina and get away. A bit of continuity would be nice.

While there’s certainly plenty of often lengthy but beautifully rendered in-game cutscenes that are on par with any popular anime, it’s nonetheless difficulty to hide how Xenoblade Chronicles 3 pushes the Switch hardware beyond its limits, which was already evident with its predecessor released around the beginning of the console’s life.

Dynamic resolution does its best to maintain a consistent 30FPS though it often means the detail of what you see on screen regularly turns to mush. It’s not something you may be paying attention to in the thick of battle but it does undermine the game’s feature of letting you take screenshots that remove the UI, unless you only plan to share these images on your phone and nowhere else with more scrutiny. But even that scaling resolution isn’t enough sometimes when some really gigantic battles where there’s so much happening on screen also causes the frame rate to chug.

Having tested both on an OLED TV and in handheld mode with the OLED model, the latter’s smaller size doesn’t do enough to mitigate resolution issues, while we felt more comfortable on the big screen where all the information coming from different command icons and menus are at least easier to read.

As a first-party exclusive, Xenoblade Chronicles 3 still holds up better than most third-party ports. But it does serve a reminder that, to use the game’s parlance, perhaps Nintendo’s console is nearing the end of its own term. But if so, then this is the epic melancholy RPG to see it off.

Xenoblade Chronicles 3 takes the best elements from past iterations and continues its tradition of creating scope and spectacle, but imbues its young heroes with both maturity and melancholy in a sadly timely story of nihilistic war that also brings a message of hope to break its endless cycle, and the little ways new relationships can be fostered even just simply by talking to people.

It may not necessarily convert newcomers, especially if you have an aversion to anime or cutscenes that drag on an already lengthy runtime. Nonetheless, compared to a decade ago when fans had to beg for these releases in the West, we’re in a golden era for Japanese RPGs and this certainly helps keep that flame burning.

Plenty to do and explore

Cutscenes do go on and sometimes divorced from gameplay

Why Ted Lasso belongs on the telly, not in FIFA 23

Apple TV’s made-up football team will be playable in EA’s new game, but Tom Wiggins thinks mixing reality and fiction is a mistake 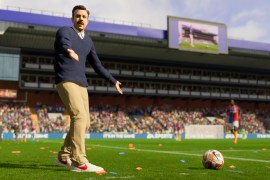