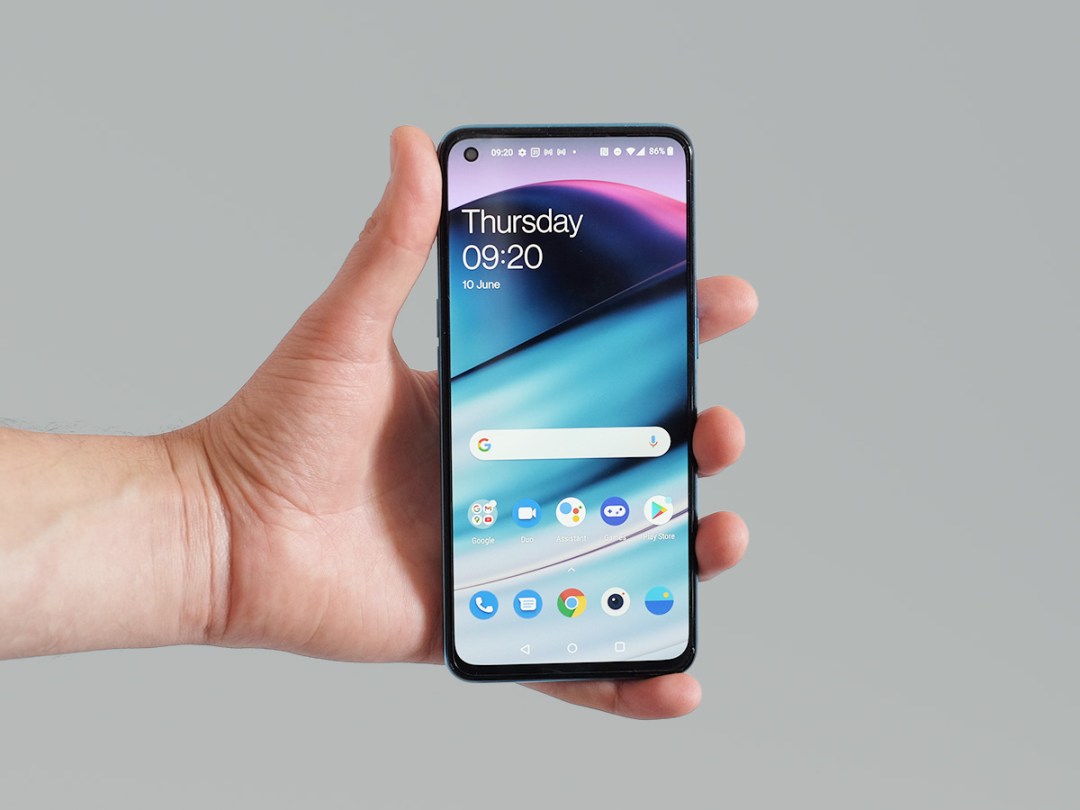 The OnePlus Nord CE 5G is the newer, cheaper version of the original OnePlus Nord. Is it better? Hell no. The back is plastic rather than glass, the main camera is worse, the processor doesn’t have as much gaming power, and at today’s prices you only save £30.

But who knows if the original Nord will still be around for £329 tomorrow? The OnePlus Nord CE 5G offers the basics of the current OnePlus experience, including 5G, at a reasonable price.

We think the enthusiast bargain hunters out there should dig a little deeper into the world of Chinese phones, with brands like Xiaomi and Redmi. But if that’s a step too far and you’re just after a likeable phone that’s not too big and looks good, the OnePlus Nord CE 5G is just the ticket.

Value used to be one of the key words you would associate with OnePlus. Its phones were always surprisingly good considering how much you paid for them. The OnePlus Nord CE 5G is a bit more… down to earth. It starts at £299 for the version with 8GB RAM, 128GB storage. A jump to 12GB RAM, 256GB storage costs £369.

New combatants have entered the UK ring since OnePlus’s glory days and we can think of a few phones that might be better buys for some of you. Xiaomi makes a bunch of them. The Xiaomi Mi 10T Lite has 5G, a bigger 120Hz screen and a glass back, and starts at £229 — granted, it has 64GB storage, not 128GB like the £299 OnePlus Nord CE 5G.

And if you don’t really care about 5G at all, the 4G Xiaomi Redmi Note 10 Pro is hard to beat at around £250. The processor is marginally worse but the camera is better and we prefer it for gaming thanks to its stereo speakers and larger screen.

However, not everyone judges phones by their specs and features alone, and the OnePlus appeal is real. The OnePlus Nord CE 5G has a lovely understated look that is much classier than a lot of its rivals. It’s smaller too, an all-round less nerdy Android — even if OnePlus is utterly beloved by nerds the world over.

The “CE” of the OnePlus Nord CE 5G name stands for core edition. It’s a bit like the “fan edition”phones Samsung makes. The name is all about a creating a way to show this phone is not quite as good as the rest, while slapping a friendly face on the downgrade.

And the phone we’re taking a step down from is the OnePlus Nord, one of the OGs of affordable 5G and a 5-star Stuff.tv stunner. So, yeh, we can’t help but go back to misty memories of using that phone when talking about this CE follow-up.

The first cut-down part you’ll notice is the back. It is not made of glass anymore. The OnePlus Nord CE 5G rear is plastic, but it does have a rather lovely matt finish that looks great and feels much better than the textured plastic of the rival Realme 8 Pro.

The OnePlus Nord CE 5G ‘look’ is more sophisticated than that of the average sub-£300 5G phone, even if OnePlus diluted that a bit by putting some purple at the corners of the back curves for some reason.

That touch of class extends further too. The OnePlus Nord CE 5G is one of the cheaper phones with an in-screen fingerprint scanner. Most of the other £200-270 phones we might suggest as alternatives tend to have rear or side-mounted ones: just as good in a practical sense but not as flash.

A lot of the OnePlus Nord CE 5G draw is about the look and feel, as long as you don’t think too much about how you could have got a glass back by spending £30 more on the original Nord.

A few little cracks start to appear if you look too deep into what’s going on inside. The OnePlus Nord CE 5G has a 64-megapixel primary camera, and 8-megapixel ultra-wide and a 2-megapixel monochrome one. We assume a OnePlus employee must have found a few million of these monochrome cams discarded in a skip because this last camera is totally pointless.

The OnePlus Nord CE 5G can shoot lovely images but when we compared them to the best from the class of £200-300 we noticed the OnePlus has a greater tendency to flatten textures into blocks of colour and mush up fine detail in the darker parts of a scene. It’s a step down from the OnePlus Nord’s 48MP IMX586, if not a catastrophic one.

Its ultra-wide camera is fairly basic, and the images look a little soft even without zooming when you throw them up on a monitor. OnePlus also tries to hide that it uses lower-end hardware by jacking up the colour saturation, although the effect is not unpleasant.

You can also find a bunch of phones with as much power as the OnePlus Nord CE 5G, or more, for less cash. And a quick side-by-side blast through Fortnite shows the CE isn’t quite as strong a gaming phone as the original Nord.

The golden oldie Nord lets you play Fortnite at “Epic” visuals, while the OnePlus Nord CE 5G is capped at “medium”. Why? This phone has a Snapdragon 750G chipset, the Nord a Snapdragon 765G. They have similar CPU power, but the 765G has more 3D grunt, a big part of why some Snapdragon 765G were such great buys. We’re looking at you, Realme X50 5G.

You get the impression the OnePlus Nord CE 5G isn’t made for the kind of nerdy audience that was once basically the entire OnePlus audience. It’s for people who would look at your blankly at the mention of “Snapdragon”, people who don’t pixel peep at their photos or notice the when the frame rate in their game dips a bit.

That does not mean performance has been overlooked, mind. The OnePlus Nord CE 5G feels slick. It doesn’t miss a beat as you jump between apps.

This sort of person will also get on best with the OnePlus Nord CE 5G’s battery. It’s a 4500mAh unit that usually makes it through the day just fine, but doesn’t hold up to a hammering as well as some of the other phones you might buy with £300 in your pocket. These tend to have slightly larger batteries, and perhaps tighter control over what can happen in the background, which may affect how quick a phone feels when you dart between apps.

Still, you do get 30W fast charging. This takes you from a completely flat battery to 61% in 30 minutes, and just a quick 10-minute blast before you head out for the night will see you right.

We haven’t spent any time talking about the screen, because it’s very similar to the kind of display OnePlus normally uses. It’s a mid-size 6.43-inch Full HD AMOLED. Sharpness, colour and contrast are all great, but some cheaper rivals like the Oppo A54 5G do look marginally brighter on sunny days, despite OnePlus’s claims of searing 1000-nit brightness.

The OnePlus Nord CE 5G is one of the best affordable-ish phones for people who glaze over a bit when friends start talking tech. Put your money elsewhere and you can get slightly better cameras, bigger screens and faster processors, although ask for all three and you’ll have to sacrifice 5G.

We’re talking about phones like the Xiaomi Redmi Note 10 Pro and Realme 8 Pro. One of the top 5G options you might consider is the Xiaomi Mi 10T Lite. Its 64GB version can at times be had for as little as £200 online. It has the same CPU, a bigger screen and a glass back. So if you’re here for that classic OnePlus bargain glow, consider that phone instead.

Don’t forget the original OnePlus Nord either, although judging by the OnePlus Nord CE 5G it may be gone by the time you read this. At the time of writing the Nord is only £30 more, but has a better primary camera, a lovely glass back and superior gaming performance.

Don’t buy a OnePlus Nord CE 5G expecting the kind of red hot bargain that made OnePlus famous in the first place. OnePlus basically took the original Nord, made it cheaper to produce (and a bit worse) but has not drastically cut the asking price, by today’s numbers anyway.

It’s a solid phone, and still coasts by Samsung in terms of the value for money on offer. However, with stacks of competition from the other rising Chinese brands, like Xiaomi and Realme, the key appeals here are less about the OnePlus Nord CE 5G’s tech and more about what’s going on outside.

The OnePlus Nord CE 5G is smaller, lighter and thinner than most affordable 5G phones, and looks more elegant than damn near all of them. That may not be enough to satisfy the old-school OnePlus crowd, but it should do the job for many.

OnePlus Nord CE 5G might not be the most powerful 5G phone, it’s smaller, lighter and thinner than most affordable ones

Smaller and lighter than many

Some cheaper phones have better cameras

The original Nord was more powerful