Hudly, you say. I had a Hudl, is that the same thing?

Not quite. Hudly is a HUD, which stands for head-up display, and it’s the sort of tech that’s been gracing Top Gun fighter jets for years. It eliminates the need to take your eyes off the prize, putting all the important info right in your frame of vision. We’ve seen attempts to create them before – but never this gracefully.

So it’s like Google Glass – but on your windscreen?

Actually, yes. Like Google’s micro-screen headgear, Hudly’s deft display relies on a visor-mounted projector to send data to a transparent plate of optical glass that sticks to your windscreen. And, just like Google Glass, it uses your phone to deliver the computing power.

It shouldn’t be: the projector is apparently powerful enough to cope with direct sunlight, and the brightness automatically adjusts for the conditions – so you shouldn’t be blinded if there’s a sudden storm. The glass plate is also curved, which is meant to reduce the dreaded glare effect.

What can it tell me?

If you hook a Hudly up to your motor’s OBD2 slot – something that every car manufactured after 1996 ought to have – then it’ll display all the dirty details right in front of you. Think speed, fuel and all the rest.

It’ll also talk to iOS and Android smartphones, so you can keep up with your busy social life (or pester Siri to dial your mates) without the faff of a handsfree kit. Notifications show up just like they would on your mobile, so there’s no new interface to learn, either.

Won’t it still be a bit distracting?

That’s a matter of preference. In essence, Hudly is just a display – albeit a ruddy good looking one – so it’s only as distracting as what you put on it.

Because it runs your smartphone apps, you can stick a sat-nav on it for floating directions straight to your destination. Dedicated HUD software such as Navier will overlay directions on the road, whilst the manufacturers reckon standard navigation apps will look pretty fly, too. Just don’t start Pokémon hunting with it.

Go on then, let me try one!

Sadly, you can’t. At least, not yet. Hudly is looking for funding on Kickstarter – which could mean that it never gets made. That said, it’s hit 10% of its goal already, so it seems we might not be the only ones who like the idea of augmented reality in the roller.

All being well, early backers will be gifted a Hudly by Christmas – just in time for the Boxing Day drive home.

It won’t be long before Alexa is bringing the car around, like a 21st century Jeeves 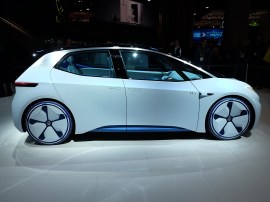 Fully Charged: Get a Moto G for £100, the HUD-equipped motorcycle helmet, and Aston Martin recalls 17,000 cars 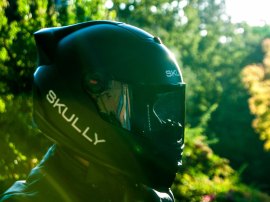 Dan Eisenhardt talks head-up displays, Recon’s Jet being “nothing like Google Glass” and the glamorous future of wearable technology 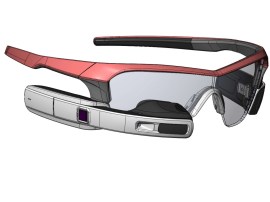