We love Google Glass. We love Grand Theft Auto. And now we love Android developer Mike DiGiovanni for combining both of them in an ingenious little hack.

By creating a PC app to capture GTA 3’s GPS map DiGiovanni has managed to pump it directly onto Google Glass’ display over Wi-Fi, letting you navigate the streets of Liberty City in a whole new dimension.

While it only reaches around ten frames per second, it’s still reportedly smooth enough to drive around with minimal pedestrian casualties, though the constant screen-on time does kill Glass’ battery after just one hour.

While it won’t work with GTA V due to the requirement for a PC, we’re hoping that Glass and the next-gen consoles will get to play nice with each other when all the dust has settled after their respective launches. Join us in crossing our fingers, won’t you? 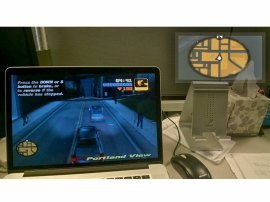