Until today, Alexa was limited to the Echo, a plug-in speaker you had to shout at from across the room to get it to respond. The Amazon Tap and Echo Dot are two sides of the same bluetooth speaker coin, with each one fixing one of the issues early Alexa adopters had with the tech.

First up, the Echo Dot.

There might be a tiny speaker inside, but the Echo Dot is more of an upgrade kit for your existing speakers, rather an a replacement for them. It’s a Wi-Fi-enabled hockey puck that can connect to your stereo, either wirelessly through Bluetooth or with a cable.

It’s not designed to take on Sonos, so even if you bought multiple Dots, you wouldn’t be able to network them for multi-room music.

Instead, it works exactly like the original Echo, meaning you can ask it questions, get it to read the news or give sports scores, set alarms and buy things from Amazon, as well as order pizza from Dominoes or a cab ride though Uber.

You’ll be able to stream music from Amazon Prime Music, or from any Echo-integrated service – so Pandora, iHeartRadio, and Spotify.

It’s half the price of the original Echo too, at US$90 vs US$180. You won’t just be able to log into Amazon and add one to your basket, though.

The Echo Dot can only be bought through Alexa, meaning you’ll need to have the original Echo, or a Fire TV in order to snag one.

There aren’t any restrictions on the Amazon Tap, a more traditional portable Bluetooth speaker that also happens to have an Alexa voice assistant built in.

This US$129 cylinder looks more than a bit like the UE Boom 2, complete with cloth material around the edges.

Two speaker drivers should mean music sounds great for the size, and the rechargeable battery should last for around nine hours of playback.

Alexa’s the star here, though. The Tap does everything the full size Echo can do, only you have to hit a button rather than saying "Hey Alexa". That should help preserve battery life, but it won’t matter when you’re away from home; Alexa won’t work without a Wi-Fi connection.

Alexa’s seen a few upgrades since it first appeared on the Echo, too. It’s going to be compatible with Honeywell and Nest smart thermostats by the end of March, on top of the existing interactions that let you control your lights and other smart home tech.

Unfortunately for us Brits, there’s still no word on when Amazon plans to roll out the Echo range to countries other than the USA, but if you live in the States, this is as close as it gets to having your very own J.A.R.V.I.S. – at home and on the move. 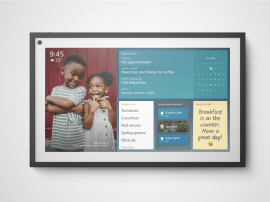