It’s pretend IFA week here at Stuff, which means even though Europe’s biggest gadget show is taking place in Berlin, plenty of brands have side swiped this year’s event due to Covid and opted to do their own thing online – and that includes Philips TV and audio.

Quick recap: Philips TVs are the ones with Ambilight LEDs on the back, awesome picture processing on the inside, and if you’re lucky/flush enough, Bowers & Wilkins sound round the front. That now includes the new OLED+935 model, which comes in a new compact (ish) 48in screen size.

Philips is also responsible for the Fidelio audio brand, which has just made something of a comeback with the X3 studio-grade headphones finally on sale as of yesterday. Joining a slew of other earphone and headphone announcements are a selection of soundbars and a multiroom speaker system. Let’s dive in.

It’s fair to say we’re unashamedly smitten with Philips’ OLED TVs, so while the all-conquering OLED+984 currently sits atop our top ten TV list, it could be about to be toppled by one of its own – the OLED+935.

Launching this month in 55in and 65in variants, with a 48in to follow in October, the OLED+935 features a new 4th gen P5 processor with a dedicated AI chip to bring greater realism and a more natural picture to whatever you’re watching on the box.

The OLED+935 continues to be one of very few sets to offer support for all of the major HDR formats with the new P5 AI+ processor claiming to offer better overall HDR performance – including for HLG and both HDR10 & HDR10+ sources – while also improving Dolby Vision encoded dynamic HDR content using a special Dolby Bright Mode. The only real disappointment is the lack of any support for next-gen gaming, such as variable refresh rates and 4K playback at 120Hz.

Bowers & Wilkins is in the mix, providing a multi speaker 3.1.2 sound system with Dolby Atmos Elevation speakers covered in Kvadrat acoustic fabric. Dolby Atmos Elevation gives extra scale, height perception and immersion to the audio reproduction of films, games and sports broadcasts. Engage movie mode and the TV will even take non-Dolby Atmos content and give it some three-dimensional polish.

Four-sided Ambilight makes the OLED+935 a glower and a shower, sporting a new wellness feature with sunrise and sleep mode functions ensuring you benefit from illuminations even when you’re not watching TV. Elsewhere, there’s a backlit remote wrapped in Scottish Muirhead leather, Android TV 9 taking care of the UI, plus Google Assistant built-in and Works with Alexa capabilities.

You won’t find Bowers & Wilkins sound on every Philips TV, so the company has called on its Fidelio division to deliver two soundbars, including one with detachable speakers.

Surround-on-Demand allows the B97 to include two detachable wireless speakers that function as part of the left and right channels when connected to the main bar or as dedicated left and right surround channels when separated from the bar and placed elsewhere in the room. Clever.

The B97 system features 17 drivers (for reference the monstrous Sennheiser Ambeo only has 13) including an 8in bass driver mounted in a separate wireless sub-woofer. Altogether that produces 500W of power from the full system and 240W from the soundbar alone.

The Fidelio B95 (£799) drops things down to 5.1.2 without Surround-on-Demand, but still manages to pack in 14 drivers including two angled up-firing Dolby Atmos Elevation units and a 8in wireless subwoofer.

Overall power is 450W with 240W for the soundbar alone, and pretty much all other specs are the same as the B97, including all the necessary Dolby, DTS and IMAX certification, and oodles of connectivity options.

For something altogether more affordable, Philips is releasing no fewer than seven other soundbars between now and the end of November, from the £69 B5105 to the £599 B8905.

Watch out Sonos, the Philips TV & Sound Wireless Home System uses DTS Play-Fi tech to bring together a bundle of different speakers and soundbars in the Philips’ range and turn them multiroom.

Draped in dark grey acoustic cloth with a metal top, both speakers cover Bluetooth, Google Chromecast and Apple Airplay connectivity, plus access to Google Assisant, Amazon Alexa and spoken activation for Siri with iOS devices. Both launch in the final quarter of 2020.

Battery life comes in at six hours (five hours with ANC) and an additional 18 hours with the wireless charging case or USB-C, where you can whizz to one-hour playback with a 15 minute power boost. The buds are also splash proof with a rating of IPX4 – perfect for outdoor use.

The T5505 are virtually identical when it comes to specs, save for smaller 8mm drivers, five hours playtime (4.5 with ANC on) and 15 in total with the wireless charging case.

Active noise-cancelling over-ears haven’t been forgotten either, with the flagship Fidelio L3 coming in time for Christmas and the marginally more affordable H9505 arriving in November looking to build on the excellent PH805 from last year.

The Fidelio L3 (£299) include a four-mic Hybrid ANC system, claiming to offer maximum noise cancellation without changing the timing & musicality of the headphone’s playback, which remains the same whether the system is on or off.

The ‘L’ in L3 might as well stand for luxury, thanks to an outer metal headband wrapped in Muirhead sustainable leather and a soft leather covered inner cushion. The smooth-covered ear-cups – in a circular shape for “better comfort and acoustic performance” – are suspended by an open aluminium frame.

The H9505 (£249) are a lightweight and foldable alternative for travel (remember that?). Innards include 40mm neodymium acoustic drivers and wide band wireless sound with the option of hi-resolution sound quality via the supplied detachable line-in audio cable.

There’s Bluetooth 5.0 combined with Google Fast Pair, Google Assistant or Siri voice assistance, and 20 hours playtime whether ANC is on or off.

How to create the perfect home cinema in five steps 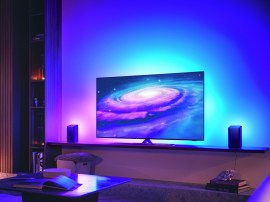