CES, the gadget bonanza that usually takes place in Las Vegas every January, might look rather different this year, but that doesn’t mean there’s not plenty of new tech being unveiled over the next few days.

JBL was so excited about what it had to show off that it’s already taken the covers off its 2021 line-up. Here’s our pick of the bunch.

If Apple’s AirPods Max are a little out of your price range, you’re spoiled for choice when it comes to alternative pairs of over-ear noise-cancellers – and JBL just made the choice a little more difficult.

Its Tour One cans (US$299.95, due May), pictured above, might lack a little design flair but the specs speak for themselves. You get adaptive noise-cancelling that automatically adjusts depending on how much racket is being made around you, hi-res audio support, Google Assistant and Alexa onboard, and a battery that lasts up to 50 hours.

The world of true wireless in-ears is arguably even more crowded than the cans, but JBL has got a new pair ready to fight for space.

The Tour Pro+ buds (US$199.95, due May) come in a charging case that means you get a total playtime of 32 hours, although they won’t last quite as long with the active noise-cancelling turned on. 6.8mm dynamic drivers push the sound into your lugs rather than keeping it out, plus there’s an app that helps you find the perfect fit by measuring how much air leaks out when you’ve got them in.

We’re big fans of JBL’s Bluetooth speakers here at Stuff and the Charge 5 (US$179.95, due April) will be more than welcome to soundtrack our first post-Covid knees-up.

The design isn’t a drastic departure from its predecessors, but it comes with a racetrack-shaped driver, separate tweeter and dual passive radiators to pump out your tunes, plus it’s rated IP67 for water- and dustproofing. The battery lasts up to 20 hours, but you can use some of its 7500mAh to charge your phone if it needs a bit of a boost.

Spent a lot of time at home watching TV lately and decided you could do with a soundbar? The only problem with JBL’s Bar 5.0 Multibeam (US$349.95) is that it’s not going to be available until May, but there are plenty of reasons to be interested in adding one to your setup.

With support for Dolby Atmos and Ultra HD 4K pass-through with Dolby Vision, it’s got the latest telly standards covered, plus Chromecast, AirPlay and Alexa Multi-Room Music are all onboard.

If you think these L100 speakers look a bit retro, that’s because they’re based on a pair that were first released in the ‘70s. But when they look this good, who’d be against keeping the look alive?

750 pairs of these special-edition floorstanders will be made to mark JBL’s 75th birthday, and while the insides are almost the same as the 2018 reissues bar a few tweaks, they’ll come with special badges and a commemorative plaque to indicate how special they are.

They go on sale in May and will set you back US$5500 a pair, while JBL also unveiled a 75th anniversary integrated streaming amplifier too. 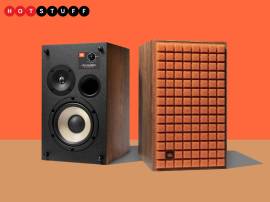