We imagine that quite a few of the people reading these words won’t remember the launch of the iconic Technics SL-1200 turntable, so it’s worth a quick recap. Launched in 1972, it became the perfect tool for disco DJs wanting to deliver funky beats to the boogying masses.

Reincarnated a few years ago in the form of the updated SL-1200MK7, the newly announced SL-1200M7L jazzes things up with seven different colours — namely, black, red, blue, white, green, yellow and beige.

Featuring a golden anodised tonearm and an engraved serial number (only 12,000 units will be released globally), the SL-1200M7L also packs in a handsome slip mat, complete with a gold Technics logo and 50th anniversary icon.

Looks aside, you’re getting a high rigidity cabinet with a dampening insulator to minimse pesky vibrations, along with pitch control, reverse play, and a starting torque/brake speed adjustment function. Oh, and there’s a bright LED stylus illuminator thrown in for good measure too.

Available for £899, you can pre-order the SL-12000M7L from retailers now, ahead of its July release. 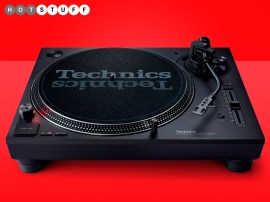