Given how long families have been forced to stay apart for over the last year or so, it’s not surprising that Amazon has been beavering away developing gadgets that allow people to feel closer to each other when they can’t be in the same room. That’s the mission statement of Amazon Glow, a nifty new gadget for kids that merges tech with tactile play. It works like this: the nippers play games, read books on draw on a 19in projected touch-sensitive virtual space, while interacting with loved ones on an 8in LCD display. On the other end of the call, an adult can keep an eye on the kiddo using the Glow app on a tablet and join in with the fun. As well as offering classic games such as Chess and Go Fish, Amazon has partnered with the likes of Disney, Nickelodeon and Mattel on games and activities designed specifically for Glow, accessible via Amazon Kids+, of which you get a year’s worth for free with a new purchase. Also included is a Tangram Bits puzzle game, a mat and a mat case. Amazon Glow will initially be available through an early access program in the US, starting at $250. Hopefully a UK rollout will soon follow.

Not quite the usual deluge, but plenty that’s new 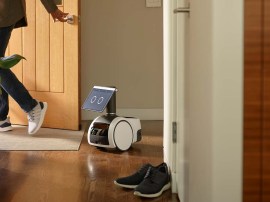