Logitech has created a preposterously expensive webcam for that equally preposterous Apple Pro Display XDR you’ve just bought. Designed specifically for the lavish new Mac Pro monitor, which despite retailing for £4,599 doesn’t include a built-in cam (or even come bundled with one), the 4K Pro Magnetic Webcam will let you use high-end software like Skype and FaceTime for the low, low price of $199. Joking aside, it looks like a nice piece of kit, and sports a wonderfully minimalist design, a secure magnetic mount, and promises to deliver crystal-clear 4K Ultra HD video at 30 fps. Although it evidently isn’t cheap, if you can afford to drop well over four grand on a monitor this probably isn’t going to break the bank.

The GoPro Hero10 Black is a little box of 5K tricks 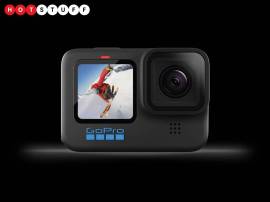