Foldable phone fans that don’t live in China (or are friendly with a grey market importer) will finally be able to get their hands on the 2022 Moto Razr from today. The top-tier clamshell is on sale in Europe right now, with UK availability set to follow in the coming weeks.

The closest rival to Samsung’s Galaxy Flip 4 went on sale in China back in August, drawing power from the latest Snapdragon silicon and packing a potent pair of rear cameras. Prices started from 5999 Yuan (around £750) at home, but the cost has gone up for the phone’s international debut: Europeans can expect to pay €1199, while in the UK we’ll be able to pick one up from £949. Sadly for Americans, there’s still no word on whether it’ll be heading to the US.

Just like the original reborn Razr and Razr 5G, this third-gen phone pairs a small outer display with a larger, folding internal one – only here Moto has ditched the ugly notch of its predecessors. The 2022 Razr has a 6.7in display that covers the entire inside of the handset, and it’s a bit of a peach on the specs front too. We’re talking 10bit colour, HDR10+ video playback and a whopping 144Hz refresh rate – that’s more than you’ll find on any other foldable. Moto reckons it has minimised how visible the screen crease is by using a hinge mechanism that folds the flexible OLED panel into a teardrop shape.

That hinge can hold the phone half-open, so you can use it as a tiny tripod for hands-free photos, or angled for watching videos without having to prop it up or buy a stand. Motorola is promising Dolby Atmos sound, too, so the built-in speakers should pack a punch.

On the outside, the 2.7in external display gets a handful of new widgets, which should mean you don’t have to flip the phone open quite as often as with the previous-gen model. It’s flanked by two cameras: a 50MP main snapper with optical image stabilisation, and a 13MP ultrawide with autofocus – which Moto says is good for macro shooting as well as wide-angle pics. There’s also a punch-hole 32MP cam on the inside for selfies and video calling.

Power comes from a Snapdragon 8+ Gen 1 CPU, paired with either 8GB of RAM and 256GB of storage. That’s a big step up from the outgoing phone, which used a distinctly mid-rung processor, but a step behind the China-only variant, which had 12GB and 512GB of memory and storage respectively.

That said, a 3500mAh battery is a welcome step up from the previous-gen, which suffered with comparatively short lifetime away from the mains. Expect 33W wired charging.

It runs Android 12 out of the box, with no word on when an upgrade to Android 13 will land. 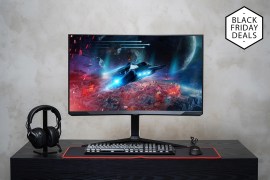