IKEA has once again come good as the world’s greatest purveyor of cheap-and-cheerful homeware with the launch of a £10 smart bulb. Nope, that’s not a joke. The Swedish company has rolled out a new dimmable smart LED bulb called Tradfri that can be controlled using a wireless dimmer or the IKEA Home Smart app. Pitched as a mood-setter that emits a warm, vintage-style glow, Tradfri consumes up to 85 percent less energy and lasts around 20 times longer than incandescent bulbs. At just a tenner it’s also one of the cheapest smart bulb options on the market, which means you can buy one for every godforsaken kallax you’ve ever owned.

Ikea Trådfri smart lighting vs Philips Hue: Which is right for you? 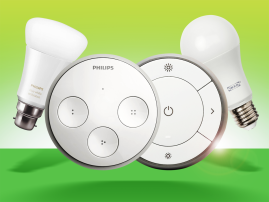