Apart from a limited edition tie-up with adidas Originals, Sennheiser had always been the distinctly German, straight-laced face of personal audio. Then a few years ago bosses had one too many after-work Jägerbombs and conjured up the achingly cool Momentum series with unmistakable stainless steel sliders and fancy finishes like suede – sehr crazy. They’ve since sobered up and the result is a pair of new Momentum Wireless 3.0 noise cancellers (£349) with the same flawless sound, but made from strokably soft sheep leather and available in the far more business-like colours of black or sandy white. Active Noise Cancellation with three different modes block out babies entirely, while a Transparent Hearing function will let in some of their screams, in case you feel you deserve to be punished, or simply require a greater bit of situational awareness.Thanks to proximity sensors the cans start up instantly when unfolded, and sense when they’re put on or taken off. A three button interface takes care of audio and call controls or there’s one-touch voice assistant access for hollering at your AI boy or girl. Siri and Google Assistant are supported from launch with Amazon Alexa arriving later in a firmware update via the Sennheiser Smart Control app. Bluetooth 5.0, compatibility for codecs like aptXTM Low Latency for synchronising audio with on-screen visuals and NFC are also included. Battery life clocks in at 17 hours and there’s Tile tracker integration in case they go AWOL at the airport. They’re out now.

Noise-cancelling 1More Sonoflow is a Black Friday steal at £65 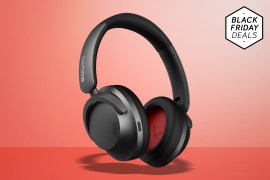 Sorry Sony – a new challenger is on the way 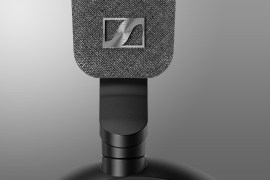