With so many streamers to choose from, TV boxes are starting to become as rare as a partridge in a pear tree. Even streaming devices aren’t as popular, with most TVs offering their own interface. But if there’s one thing everyone can agree on, it’s that most TV software sucks. Enter Roku to solve this problem.

Partnering with telly-makers TCL, Roku has taken its streaming box software and plugged it straight inside a telly. Plus, it’s a 4K QLED gogglebox, using some of the latest panel tech. There are plenty of size options available, ranging from 43-inches to 65-inches. It makes for an ideal no-fuss watching solution to strap to your wall.

Inside this new telly is a 4K UHD QLED panel. The quantum dot tech promises colourful and sharp images thanks to TCL’s Super Resolution, and a 60Hz refresh rate. It supports HDR10, HDR10+, HLG, and even Dolby Vision which is not always the case. You’ll also find support for Dolby Audio, though unfortunately not Atmos.

Connectivity wise, you’ll find three HDMI 2.0 ports. They’re not the latest, but are plenty capable of delivering 4K UHD pictures at 60Hz. It’s one of the features that helps make the telly a little friendlier on the wallet. You’ll also find support for AirPlay 2, and all the smart voice assistants available (yes, even Siri).

Arguably the most attractive feature of the telly is Roku’s software. The personalised home screen allows you to quickly jump back into saved content, while also suggesting new shows. Using the software will feel slick and quick, since Roku’s taken it straight from its streaming boxes. It also brings plenty of access to content, with over 500,000 movies and TV shows in Roku’s library. Plus, you can sign in to third-party streaming apps for even more stuff to watch.

Roku and TCL’s new QLED telly starts from £319 for the 43-inch model, and goes up to only £529 for the 65-inch version. It’s certainly a more affordable TV on the market, and doesn’t sacrifice on the features you love the most. 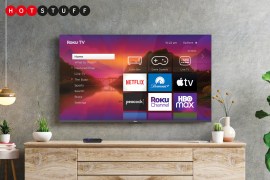