Home / Hot Stuff / Great Scott! Lego has revealed a 1872-piece 3-in-1 Back to the Future DeLorean Time Machine

In classic 1980s movie Back to the Future, a nutcase scientist transforms a DeLorean into a time machine. As his friend looks on in disbelief, Doc Brown remarks: “If you’re gonna build a time machine into a car, why not do it with some style?” Well, quite. And now Lego is giving you the chance to do the same, from the comfort of your own home – and without having ‘borrowed’ key components from nefarious murdery types.

The new Back to the Future Time Machine (£149.99/$169.99, available 1 April) contains 1872 pieces and is in fact a colossal three-in-one set. You’ll need to decide which version of the famous car to build – because you can only build one at a time from what you get in the box.

A completed car ends up around 35cm long and, as ever with Lego sets at this price point, is packed with details. These include wheels that fold down for flight mode, a light-up flux capacitor, printed dashboard dates, opening gull-wing doors, Marty’s hoverboard and swappable license plates. You also get Doc and Marty minifigs that are entertainingly out of scale with the car – unless you’re aiming to play out Lego Honey I Shrunk Back to the Future on your desk.

Doc, you’re my only hope

Co-writer and co-producer of the Back to the Future trilogy Bob Gale is, unsurprisingly, a fan of the set. “Universal, Amblin Entertainment and the Back to the Future filmmakers are delighted to have partnered with the Lego team in the creation of this fantastic kit,” he said, adding that in the movie “Doc Brown spent almost 30 years and his entire family fortune to build his Time Machine”. Fortunately, you’ll be able to build this LEGO model in “significantly less time and with far less expense”.

It turns out that as part of the launch, we’re getting some new (Lego) Back to the Future footage too. The Lego Group is taking Doc and Marty on one more mission, in the animated short Brick to the Future.

And if that’s not enough, there’s going to a themed launch event at Lego’s Leicester Square on 1 April, where you’ll be able to pose in front of a real DeLorean, star in your own Back to the Future movie poster and capture a photo print out to share with friends.

Just don’t get too excited when you get home and start messing around with your completed set. Zoom it across the table at 88mph and all you’ll be left with are scorch marks and no Lego. Probably. 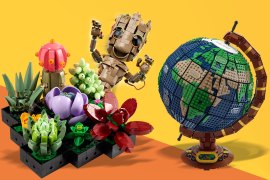