Peripheral maker Razer have upgraded two of its most popular gaming mice to create the new DeathAdder V2 ($69.99) and Basilisk V2 ($79.99). Both mice share a number of upgrades including a new Razer Focus+ Optical Sensor complete with Smart Tracking, Asymmetric Cut-off and Motion Sync features, Optical mouse switches rated for 70 million clicks, and a “highly flexible” Razer Speedflex Cable that promises low-drag and less frictions along the normal pinch-points. The DeathAdder V2 has also been reshaped ever so slightly and fitted with an new sweat-resistant coating so it can better handle those mammoth gaming sessions. The Basilisk V2, meanwhile, has been improved with 11 programmable buttons that can be used for keymaps, item hotkeys, or any other in-game commands, and a customisable scroll wheel resistance that can be fine tuned by users to suit their preferred level of tactility. 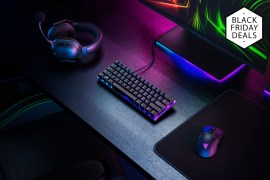