Listen up professional music listeners, because there’s yet another pair of premium-badged true wireless earbuds competing for your hard-earned. As part of its annual Galaxy Unpacked event, Samsung announced the Galaxy Buds Pro, its most advanced in-ears to date. The $200 Buds Pro are no longer positively jelly beanlike in appearance, but they adopt the same metallic design as the Galaxy Buds Live before them, while a better seal in your ear should help with noise cancellation. An IPX7 water resistance rating makes them gym-ready to boot. But it’s what’s inside the Pro that makes them interesting. The pairing of an 11mm woofer with a 6.5mm tweeter balances, Samsung says, deeper bass with crisp treble, while the three microphones and voice pickup unit deployed for calls should mean you’re not being drowned out by dog barks and child screams. You know, the usual working-from-home rabble. Samsung says the Galaxy Buds Pro have the most advanced ANC of any true wireless earbuds, and it’s hard to argue on paper. Both noise-cancelling and ambient passthrough can be fine-tuned, and like Sony’s fantastic WH-1000XM4 headphones, they can automatically detect when you’re talking and adjust the ANC levels (as well as turning down the music) accordingly. Like Apple’s AirPods Pro, 360 audio is supported, here via Dolby Head Tracking, and you can expect five hours of battery life with ANC permanently on, with an additional 13 hours afforded by the charging case. We await UK pricing and availability. 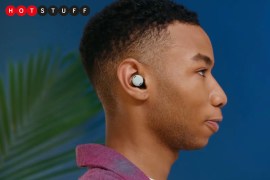