Bose’s QuietComfort series of over-ears brought the bliss of noise-cancelling to the masses, and now it wants to do the same with true wireless earbuds, a market currently dominated by Apple and Sony. Launching October 5, the QuietComfort Earbuds (£249.95) employ Bose’s proprietary noise-cancelling tech to block out undesirable racket. And the internal wizardry is assisted by the StayHear Max Tips, which Bose says physically banish sounds with their soft-yet-comfy seal. And for when you need a bit of ambient passthrough, there are 11 levels of noise control so you can let in just as much as you want. The buds, which are just over 2cm long and have a combined weight of 13g, feature voice-isolating mics and will last for six hours on a full charge, with an additional 12 afforded by the charging case. On the audio front, Bose promises faithful reproduction without “manafactured ‘boosts’ in select frequencies”, and plenty of bass. And thanks to IPX4 water and sweat resistance, they should be good for a workout. Bose has also announced the new Sport Earbuds (£179.95), re-engineered and featuring the same tips as the QC Earbuds to keep them locked in your ear without putting pressure on them. They also feature what Bose calls an “entirely new acoustic system”. They too launch on October 5, and you can pre-order both products today.

Get 44% Bose QuietComfort Earbuds in this Prime Day deal

Shhh! Noise-cancelling earphones with 44% off 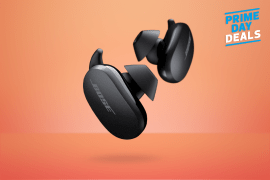